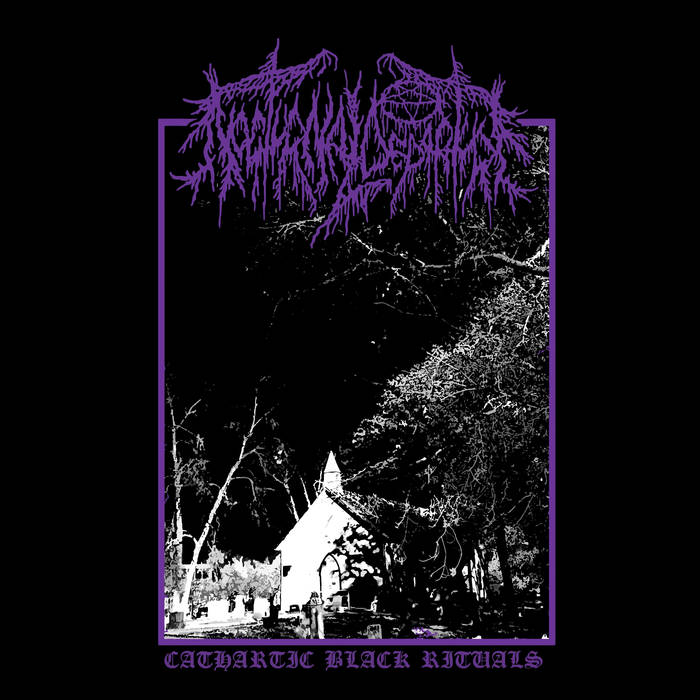 Nocturnal Departure’s debut, “Cathartic Black Rituals”, immediately emulates exactly what lovers of 2nd wave Black Metal are looking for. The dark ambient intro track sets the ritualistic and evil mood for the listener, as the subsequent song kicks off with the cold, grim riffs of a dark sonic assault which is the status quo for the rest of LP. Track after track this album brings the same level of Black Metal gold. Nocturnal Departure have an awesome blend of influences which can be heard in their song writing. Nocturnal Departure are for fans of old Darkthrone, Taake, first few Immortal releases, and other similar acts. This isn’t however, your typical cookie cutter, worship Black Metal. The thing that sets Nocturnal Departure apart is their skill level and ability to bring unique riffs and song writing to a form of Black Metal which is often copied with zero originality. There is an organic quality to their recording, which is necessary for most Black Metal, but I really love the usage of dissonant and minor melodies while still withholding the punishing and headbanging inducing Black Metal style. Nocturnal Departure also finds the perfect balance between atmosphere, dark arts ritualism, and fucking pure, cold Black Metal riffs which 100% of the time gets my blood pumping and my fists clenched.

Satan worship and Norse mythology, while being perfectly fine and loved by me, is played out when it comes to Black Metal lyrics. Nocturnal Departure lyrics are high end, and are more on the side of dark artistry and pagan/dark spiritualism as opposed to just blatant satanic babbling. Again, I’m totally game for some good ol’ “hail Satan” and “kill the Christians” but it is really refreshing to have lyrics that are more well thought out, and based off of more tangible, mature content.

Now for more specific musical analysis. Guitar parts (played by guitarist/vocalist Funeror) have an excellent blend of discordant, bleak, atmospheric licks which are accompanied with heavier, rocking power chords. Blending influences from old school Black Metal (Darkthrone/Immortal), but also more melodic Black Metal as well (Taake, Dissection). It is rare to find Black Metal guitarists who can emulate cold atmosphere and also bring riffs which truly rock! The bass (played by Illartha) isn’t hidden in the mix either, which I love.  Bass parts in this recording, instead of just following the simplest melody and rhythm (like most bass in Black Metal), are distinct and carry the counter melody for huge parts of the songs. This adds to Nocturnal Departure sounds greatly, and really brings more depth to their sound and is another reason why I believe they are a few cuts above most new Black Metal acts. The vocals are purely supreme when it comes to Nocturnal Departure and this release. Immense range, unmatched intensity, and YET EVEN MORE uniqueness in regards to the vocals of this act/album. The high-pitched screams/wails are steeped in pain and agony. The low-pitched screams bring an intense and brutal aspect and is perfectly place in contrast to the higher pitched vocals. There is also a very distinctive wail which Funeror uses, and this always evokes images and the feeling of a wolf, or perhaps even a werewolf or creature beyond our understanding, screaming and hollering into the night and at the moon. As for the drumming (played by Kryptys), it is another perfect fit for me. Black metal drums are commonly either TOO raw and/or sub-par, but Krytpys brings forth the precision of infernal war drums! Even though the caliber of musicianship is high, Nocturnal Departure does not lose the raw, brutality that Black Metal fans are looking for.

I highly recommended this album to all fans of Black Metal. (Fetid Priest of Pestilence)