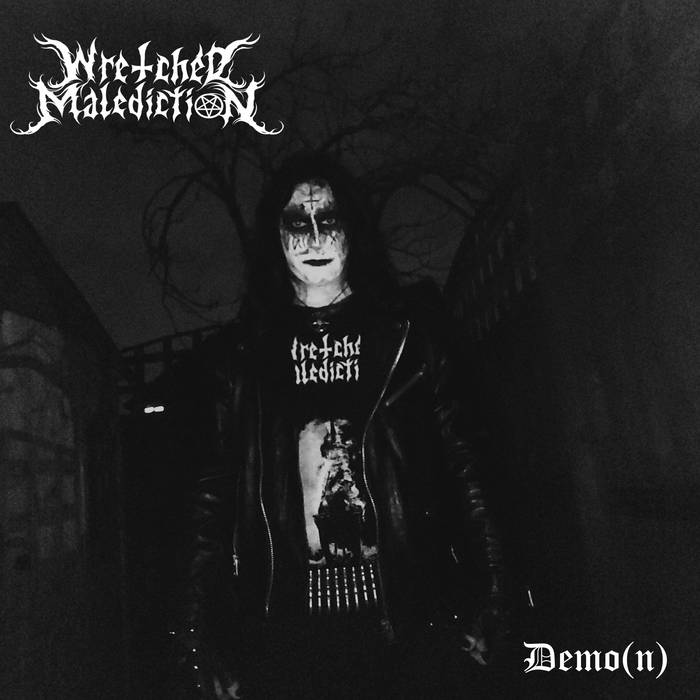 ‘Demo(n)’, the debut album from UK Black Metal one man project Wretched Malediction doesn’t open with a whimper. A quick burst of drumming based chaos with a few blasts of ice laden riffs and guttural shrieks, and then into the album proper with the ravenous tones of ‘O’ Mighty Prince of Darkness’. Full throttle blast-beat driven Black Metal euphoria is the order of the day, with guitar leads hungry to explore the endless void.

‘Fuck Your Church’ leaves very little room for ambiguity and it’s deeply anti-religious overtones actually translate into one of the catchier Black Metal songs you’ll hear this year, with a chorus that was made for screaming at the top of your lungs. And whilst the tempo remains steadfastly at break neck pace, there are little melodic diversions and interludes tucked into each song, never losing the albums intense no nonsense approach and yet adding a far more sinister and malicious layer to the overall evilness of the album.

With more than the odd nod to multiple Scandinavian influences, ‘Endless Winter’ is as gloomy and frost covered as the name suggests, dropping the pace to mid-tempo and unleashing glassy guitar leads that weave and meander steadily forward and combine with colossal sounding drum tones and powerful, grim vocal work to create one of the more vehement and harsh offerings on this opus.  Other than the previously mentioned ‘FYC’, my two favourite tracks are the short and snappy bout of Darkthrone worship that is ‘Sacrifice’, fast, belligerent drumming and demonic vocals, pure Satanic sounding riffs and the throbbing rumble of droning bass, ‘Sacrifice’ feels dangerous, and leads expertly into the equally bass heavy depths of ‘Blinded by Falseness’ whose bleak harmonies and overwhelming heaviness wrap themselves around you in a bitter caress!

A quick shout out to the excellent lyrics on the album, many of which were contributed by the talented Justine Carmen. Sadly all good things must end and ‘Disciples of Evil’ could well be referring to the albums two contributors! ‘Demo(n)’ is a vicious debut album, it progresses with a violent need to spread darkness and malevolence, as if from a void that has been breached and now leaches out it’s malice into the world. Expect more diabolical offerings from Wretched Malediction. (Marksson)