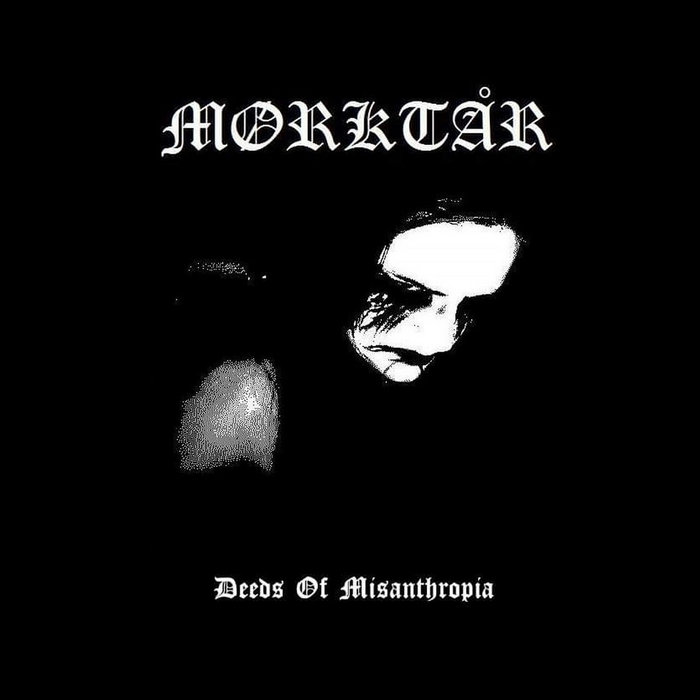 Recorded in 2019 and released in 2020 on cassette, (and then later on CD) ‘Deeds of Misanthropia’ acts as an insight into the live ritual of UK Black Metal band Morktar, who have been active since back in 2006 but have no released anything new on this side of the pandemic.

Morktar’s set opens with the ice cold guitar leads of ‘Now Cold & Dead’ and sets off at a reasonable pace whilst churning out furious symbol heavy drums, croaky anguished vocals and an off-kilter almost unhinged quality to the songs blackened melody. This release has the loose feel of a liver performance but also has the lo-fi sound of an early demo release and so works well on both levels. Each song is punctuated by vocalist Thrym angrily berating the receptive crowd with the name of the next song. ‘Blue Light of Death’ carries the momentum forward pretty much at the same pace, though the vocals here are a little more sporadic and very grim! When the pace drops and the guitar is given centre stage during this track, it sounds like a Buzzsaw cutting through the gloom. ‘Blue Light of Death’ is easily my favourite track from this release as it adds an element of groove to the bands sound as well as oscillating between outright blast-beat lead fury and then crawling, slower moments of bleak, evil sounding darkness. The fact that this is the longest track on offer and so has more room for the band to manoeuvre speaks for itself.

Of a more chaotic and savage disposition, ‘Slave til Natten’ does tend to lose itself to murky uncontrollable barbarity and the riffs and drums are pretty much all that is audible as the vocals and bass play get buried for large parts of this track. Morktar bring their set to its conclusion with ‘Painful Dark Death’, a punishing yet more coherent blast of Black Metal that occasionally lapses into rampant noise territory but retains it’s menacingly bleak guitar leads and gruelling drumming style throughout. It sounds like it was a good show and ‘Blue Light of Death’ sounds epic. (Marksson)