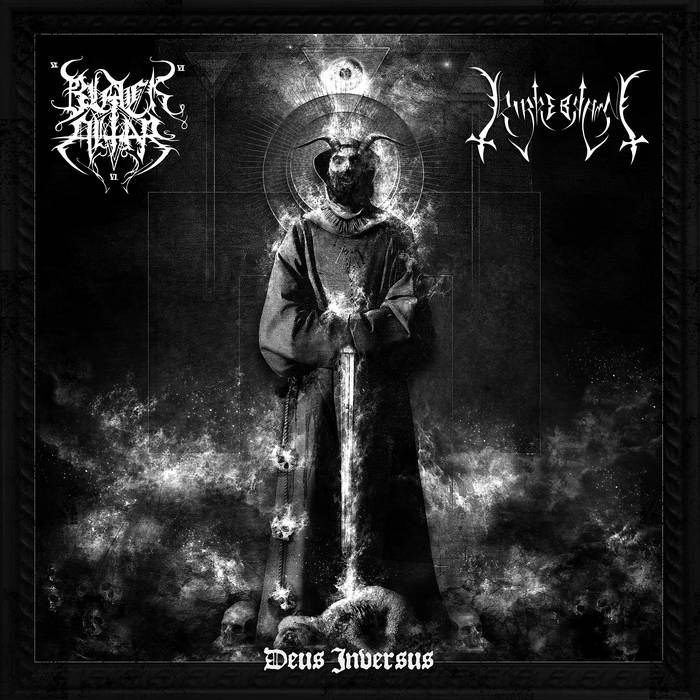 Polish Satanic Black Metal band Black Altar, now relocated to London, teamed up in 2020 with blasphemous Norwegian quintet Kirkebrann (In Norwegian this means Church Burning) to unleash a pox upon the world in the form of split album ‘Deus Inversus’ which was released via Odium Records (CD and LP) and Goat Room Productions. (Cassette) This release has then seen a 2021 CD re-release by UK label Wulfhere productions, as well as a cassette re-release by Screaming Skull Records.

Black Altar are afforded the privilege of opening the album with three songs of high quality and extremely grandiose Black Metal. With a daunting operatic backdrop to work with, Black Altar proceed to blast out an extremely satisfying dose of thunderous drum tones, steely flowing guitar rhythms and solos, and a vast array of vocal styles from haunting chants to gripping deathly growls. Whilst Black Altar are not a Symphonic Black Metal band, they do play with a panache and style that carries with it a great deal of the pomp and ceremony that frequents many a Symphonic Black Metal bands repertoire. Forget the unwavering hostility from behind the kit though, and the ravishing vocal display; the real key to Black Altars sound is the frostbitten spiteful tones that emanate from their ice cold guitar melodies which blaze a white hot trail through the dense snows of winter.

This is my first time experiencing Kirkebrann and it most certainly will not be my last. Their brand of groove drenched fast paced Black Metal is some of the catchiest, most pleasing to the ear rhythms I’ve heard in a long time. Right from the start of their opening track ‘Begrensa Bevissthet’, Kirkebrann put on an ever so satisfying show. Gloriously free-flowing riffs with more than a hint of steel in their veins, a symbol happy drumming style that glides effortlessly forward, and a bass heavy style that is topped off by hoarse, guttural growls. It all gels perfectly and with the addition of some well timed intricate guitar solos, the whole of the bands sound is just captivating; barbarically fast and gruelling and yet ridiculously hard to dislike. ‘Faux Pas’ especially is a mesmerizing track with the same bouncy style as before but with a deeply satisfying undertone that I can’t even begin to explain, as well as some intensive guitar melodies.