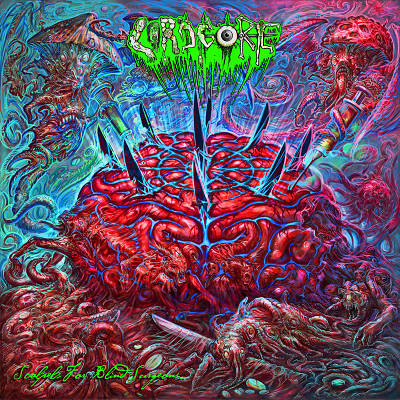 15 years, fuck off we say! The Exploited didn’t care, and so doesn’t Lord Gore, cause it’s been that long they’ve waited to create a new full-length album. Their first two studio albums were received with some kind of doubts by the media, but I’d like to point out that the style they play isn’t that easy to swallow! A mix of Death Metal and Goregrind, yes, something filled with anger but accelerating and fast forward, not anyone’s cup of music.

The eleven songs bounce between Autopsy, Regurgitate and Impetigo, not coincidentally all American Death and Grind Metal bands, so yes, the influences aren’t that surprising. The production isn’t perfect, but it fits for this style and I wouldn’t have it a different way, cause that would scuffle my expectations of underground Goregrind/Death Metal a bit. The gurgling vocals from Gurge sound like a trendy molested pig and the riffs from both drums and string duo is blistering.

The whole 42 minutes and a half sound sick, yes, even the tracks that take more  than 4 minutes… (yes believe it). I just find it a bit regrettable that the album cover doesn’t reach the level of gore of its ancestors, but their logo is gratefully still intact! Go ahead and welcome them back. (Fredde)