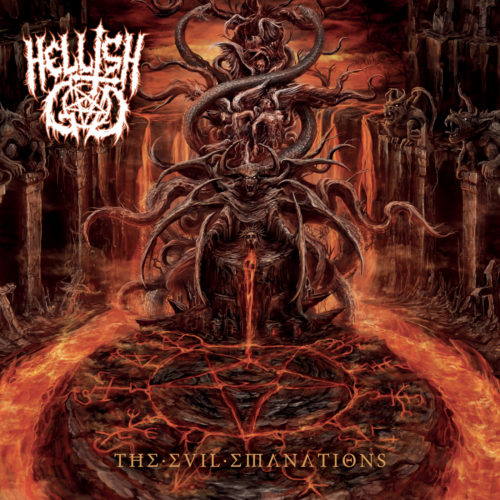 Italy has a lot to offer in terms of death metal in recent years. In 2015 some maniacs decided to call their project Hellish God. 1 year later an EP was released to give the world a first sign. Now 2 years later their debut is released and has the tasteful name “The Evil Emanations”. Left Hand Path, Qliphothic realms seem to be the topics of this album. The artwork shows it fantastically, but what about the music? Hyperblasting death metal the Krisiun/Morbid Angel way. Some Deicide moments on the guitar side, as well doubled vocals and groovy bombblast. Everything is well executed and perfectly audible although I wished the drums would be a bit more organic and not that loud in the mix. The vocals are your typical deathgrunts combined with shrieks here and there. Sadly they doesn’t stand out like their influences but fit the sound in general. It’s furious, energetic and powerful. The transitions to slow Morbid Angel-like passages are some of the highlights on the album. Soon to be classic songs are sadly missed, but we are speaking about a debut album, so who knows what these guys will bring in the future? Fans of the aforementioned bands as well as fans of fast paced death metal with a slight hint towards black metal should give it a try. (DPF)