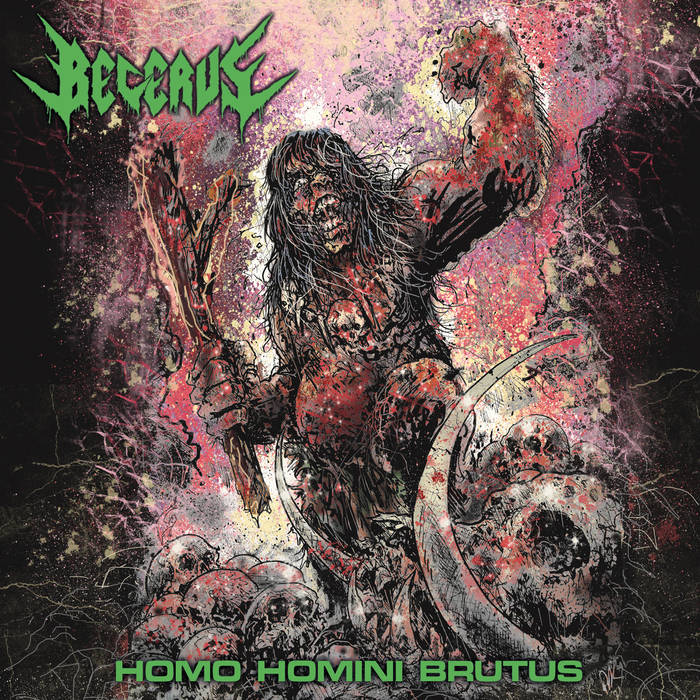 Italian Death Metal band Becerus describe themselves as ‘Purveyors of merciless brutality and ignorant obesity, offering nothing but limited music for limited people.’ Well if that combined with the caveman artwork doesn’t make you want to check out this debut album them I don’t know what will. ‘Homo Homini Brutus’ was released back in April 2021 on all formats through fellow Italian label Everlasting Spew Records, and interestingly their vocal work is all noises and grunts with no actual lyrics, which makes deciphering the bands thematic concepts one less task for a reviewer to endeavour towards. Clearly there is something going on down in Sicily and no words are required.

A haunting synth intro track with dark suspense building percussion and 80’s horror flick vibes opens the album, before the choppy riffs of ‘Primeval Ignorantia’ propels the album straight into some unashamed Cannibal Corpse worship. ‘Grotesque Parsifal Sucurandus’ sees Becerus then move in a new slower direction and the band seem to let their own style creep into proceedings more and more as the tracks progress from here. I found the most notable features of the Becerus sound were their penchant for switching effortlessly between groove drenched rhythmic riffs and chugging, meaty guitar tones, as well as the bursts of technical guitar work that flourish throughout the album. Despite the lack of lyrics, the growled vocals are impressive whilst the drums and bass are skilful and sturdy, allowing the guitarist to hog all the glory.

A decent album though not spectacular by any means. For a band who claim to be unsophisticated they certainly have an excellent level of musicianship and the album flows well from start to finish.