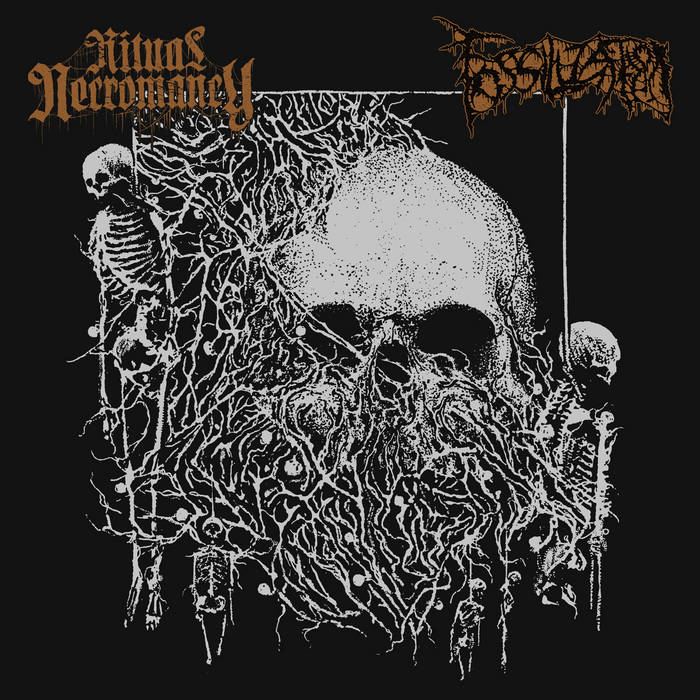 On the A-side of the split we get a lengthy track of the Portland, Oregon, USA based Ritual Necromancy. A band whose debut album, 2011’s ‘Oath Of The Abyss’, caused quite a stir among avid Death Metal fans. Unlike many other bands who released their first records around that period, Ritual Necromancy did not have that super full sound that made for a crushing experience. Instead, it was an almost Lo-Fi Death Metal record where the roughness actually encompassed the beauty. Its follow-up, ‘Void Manifest’, a single-side 12” EP, largely had a similar sound, making it an equally compelling listen. Things changed a little on ‘Disintered Horror’, the band’s sophomore album, the sound strayed away from its utter rawness and the band seemed to have chosen a more common sound. On this split release, the band opted for that same strategy, or it might even have been recorded in the same session. Again a far more chunky sound, actually quite fitting to its crunchy riffs and guttural vocals, but sacrificing on uniqueness. Their rawer approach made them stand out of the majority of the Death Metal scene. Though not at all serving us with a bad song, Ritual Necromancy now fits just straight into the, largely by Dark Descent Records and Me Saco Un Ojo dominated, slew of Death Metal bands that all sound a bit like an Incantation spin off.

The other side was taken by two tracks of the Brazilians. Most striking, after just hearing that 15 minutes of Ritual Necromancy, is that Fossilization sounds so much alike that they could’ve easily been the same band. It’s again all about that Incantation styled Death Metal with fast paced drums and intricate riffs that build up that massive wall of sound, all topped off with immensely deep vocals that seem to come out of the deepest of the Brazilian caves. Yet, the guitars are delivering some pretty interesting, twisted kind of riffs, that are more ingenious than your average Incantation-like band. All in all, both Fossilization tracks are an entertaining listen and they prove the band being able to pull off some above average Death Metal songs.

Still, after having listened to this split release, with a playing time clocking just under half an hour, a couple times, I can’t really shake off the feeling of both bands being rather interchangeable. And however offering a very decent listen, within the current Death Metal scene they are hardly anything special making it a very difficult guessing game to figure out which bands are on this split if the band names had fallen off the cover.