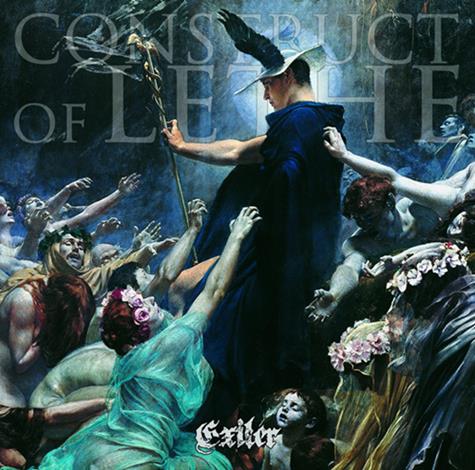 After some promising signs with “Corpsegod” and “The Grand Machination”, Construct of Lethe are swinging the axe again with the short name “Exiler”. The album starts with a more modern melodic induced sound before the Morbid Angel-“Gateways” Era riff kicks in and gives the march of this song (and to some extend of the album). The production is modern while warm, well balanced and powerful. The grooves are big, being able to write great staccato riffing with accentuated drumming and vocals, really in the vein of Steve Tucker in terms of pronunciation. Something that varies from song to song. Afterwards we got a furious blastdriven modern death metal brutality which quickly changes into a more melo-atmospheric song, almost Cinyc like singings and progressive touches with mindblowing solos and Opeth like riffing here and there for a slight progressive feel before morphing into some post metal part and ending the furious way it started. The band continues the path with killer Immolation/Hate Eternal/Morbid Angel brutality and darkness, with the use of lead guitars playing a key role to the entire sound. A lot of technical stuff is being used to create multiple facettes of morbid slashing death metal songs with a drummer, Kevin Paradis, that kills everything and incorporates some non-usual stuff in the songs. Let`s don`t forget the metallic bass which gives the right rhythmic fundament together with the drums for the fury and flames of riffs and vocals, which again, sounds killer and are more than your average growling. Dave Schmitt varies his vocals style depending on the mood that he wants to create with the riffs in combination. The label mentions Ulcerate, which in terms of progressiveness and dissonance used within the sound, might be a reference here and there. The breaks, the beats and the abrupt changes are all well placed here and show the bands song writing skills more than on the previous releases. They don`t have to hide themselves behind others right now. “Exiler” is a great follow up, filled with some fresh ideas in the band’s sound which is a development for sure. As label said themselves: for fans of Morbid Ange l (F & G), Ulcerate, Immolation, Altars…Enjoy! (DPF)