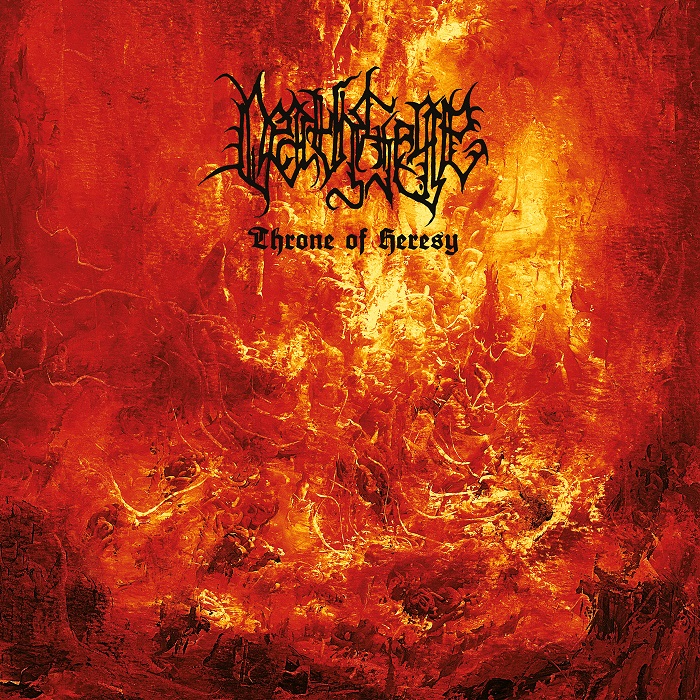 I was impressed by Israeli Black/Death trio Deathsiege when I reviewed their early demo release, I liked the raw murky production and raw, aggression. ‘Throne of Heresy’ is the triumvirates debut album and has been put out through Everlasting Spew on both CD and cassette.

Sadly I am to be disappointed by the bands full length debut offering. There is nothing wrong with the performance as such but I feel that from the very outset of the album Deathsiege are trying to fit way too much stuff into each song. ‘Throne of Heresy’ is a fast paced album and has the prerequisite amount of brutality, but it lurches from riff to solo to break section sporadically and never really settles into a groove long enough for me to glean any enjoyment from it. I also feel that the murky atmosphere of the demo releases maybe hid a few sins but the cleaner production on the album has robbed Deathsiege of any of the mystique they had previously. So what is left? A frantic and frenetic blast of hyper speed aggression created using a punishing all-encompassing drumming display, raw violent sounding vocal work and rampant guitar leads, dizzying guitar solos and a shit load of powerful bass play!

All of the key ingredients are there for this to be a killer album but for my own personal tastes it just doesn’t slot together to form a cohesive album. It may sound like a harsh critique, especially for a band whose demo releases I championed, but sadly ‘Throne of Heresy’ just doesn’t do it for me