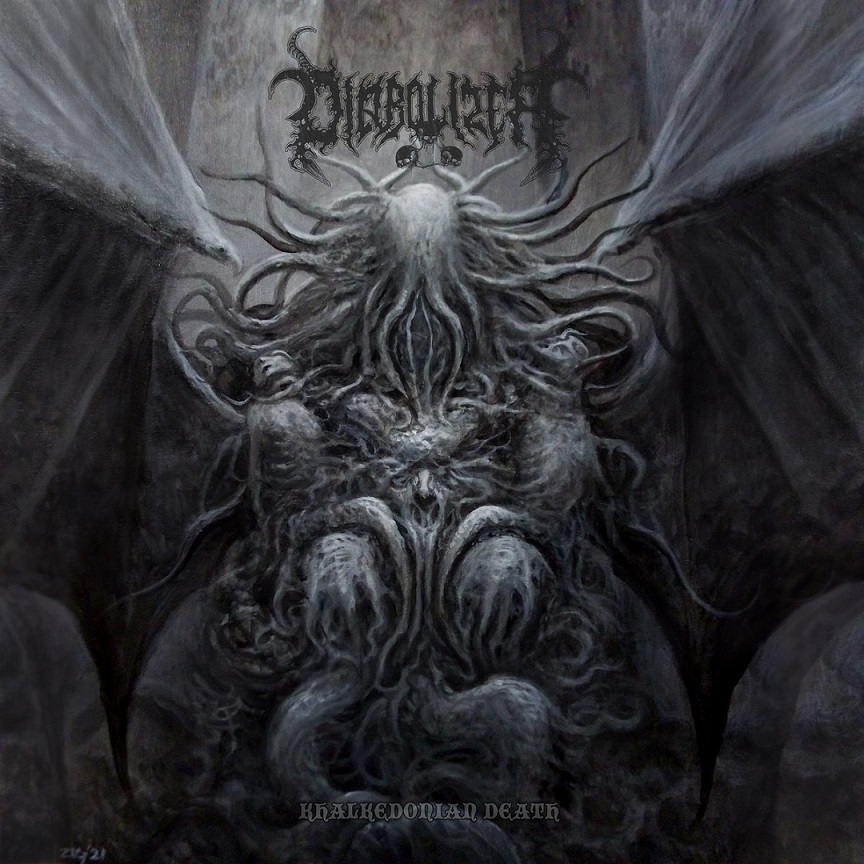 “Khalkedonian Death” is the first full length from Turkeys Diabolizer. which is formed in 2012 with members of Hyperdontia, Burialinvocation and Decaying Purity and the band set out to make a much more blistering and demented Death Metal sound than their other bands.

Straight from the opener “Dawn of Obliteration” (Immolation worship??) the mission statement is clear as day, to take your head off with a fury of brutality that is as intense as their musical ability will take them! Pushing the limits of diabolical darkness. Lots going on in every song, “Mayhemic Darkness and Possession” has some great bass playing reminisced of Sadus or Death, alongside a demented harmonic ending.

Drummer Aberrant must have 4 arms and 4 legs, the guys a machine, keeping the intensity at a peak level like a man possessed!! Middle sections of songs like “Sulphuric Vengeance” are where the band taps into a deicide style bark that scares the living shit out of every living being in its earshot. Your lawn will die that’s a fact. You could be forgiven if you find yourself getting fatigued towards the end of the album as it’s a full assault from the first second and perhaps a bit repetitive in parts, especially vocally.

The melodic guitar solos are more functional than, “Look at me doing a solo”, and keep an element of melody to the sheer brutal chaos of everything else involved. These guys can play and really showcase their ability on this album, A barrage of  intensity, technical prowess and nothing less. You would be hard pressed to find a bad riff that’s not executed like a firing squad on here.

An aggressive, abrasive and demonic first full length from Diabolizer. No weak shit on here and a welcome addition to the other great bands the members are involved with. Solid and definitely achieved what the band set out to do. Destroy! (Skye_Dogg)