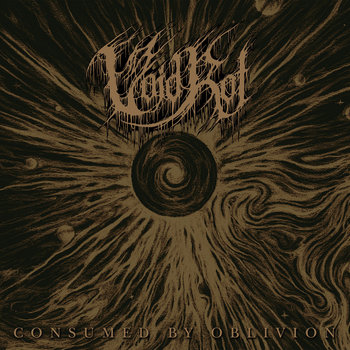 In the era of information overflow, information is the key. When it comes to music, I personally like to get some sort of an idea what  I’m about to stuff into my ears. Name of the band and / or title of the certain album, the cover of the album, maybe even the titles of the songs usually provide that kind of information (if I pay attention). What would the name Void Rot with their 2018 EP “Consumed by Oblivion” tell you?

“Consumed by Oblivion” is the debut release of the Minnesotan band Void Rot, which was a bit surprising to me, because it sounds like it had been made by people who have been perfecting their craft for years if not decades (there’s always the possibility these gents have been doing so, I just can’t find any proof of that on the internet). The 16 minutes of dense mixture of murky Death and Doom shows you don’t need ridiculous speed for your music to be furious. Crushing Doom mixed with old school Death Metal from the furthest parts of galaxy, cavernous vocals and suffocating dark atmosphere pierce through the listeners being. Even though guitars are most up front, the rest of the instruments are still recognizable, without anything being muffled.

In my opinion, this is how you introduce your project / band / work to wider public. Even though the name of the band and the title of the EP give away what kind of music you’re about to hear, the music itself is impressive enough to stay in the listeners memory and demand more. (Black Mary)