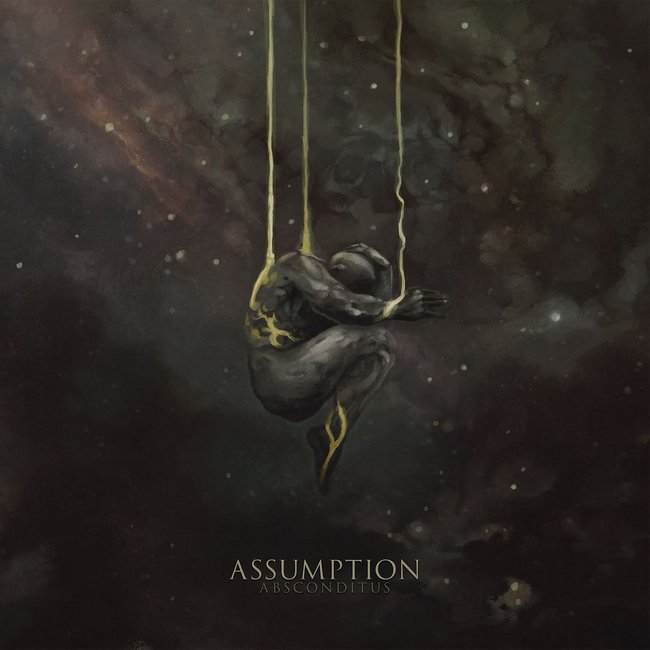 The south Italian duo under the name of Assumption was known prior for their works in bands like Undead Creep or Morbo and started Assumption as a studio project to create some heavy Doom/Death with lots of atmospheric variations. After their fantastic EP “The Three Appearances“ they`re now ready to unleash a full length called “Absconditus“(which means concealed in Latin) which has a lot to offer. The album sounds with single note picking by a guitar and the bass, both completing each other to create a dreamlike atmosphere and then change after a break into typical Death/Doom landscapes in the fields like Sorrow, diSEMBOWELMENT or Winter. Some psychedelic rock moments are well incorporated with fantastic use of effects on the guitar paired with excellent spacerock riffing. The vocals are deep and bring some Antti Bowman of Demilich to mind. The flute intro in one of the songs could have been used in an old crime or horror movie. Fantastic dark tones before the doom hammer kicks in and tells stories from other worlds and other spaces, accompanied with some tribal tom driven drumming and powerful riffs with some Morta Skuld like Doom sections and a slightly Hooded Menace feeling. They don`t fear going for ambient parts in the songs, neither do they go too much for the extreme speed eruptions diSEMOWELMENT were known for (only towards the end). This is expanding slowly just like the cosmos itself into eternity. Nothing to hide here, just sheer excellence.