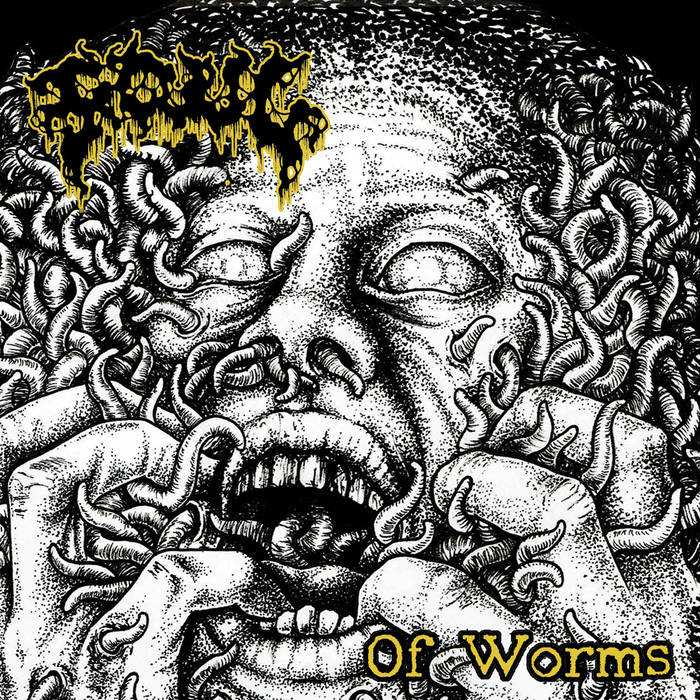 Stagnant, moist air fills the lungs as dusk ushers an icy, foreboding chill deep inside your crumbling, moribund corporeal form.  Trepidation squeezes your chest. Phantasmal fingers wrap around your throat as the menacing portents of death fill your mind. You infiltrate the impenetrable tangle of ancient, murky swamp.  Ebon shadows from innumerable primeval earthen obelisks terrorize with darkness. Towering above, decomposing limbs of timber cover the infested quagmire with their unmerciful, oppressive canopy.  Pitiless, unfeeling, dead. The rotting forest bears silent witness to the aftermath of abhorrent expiration. The nauseating stench of rotting flesh joined with nitrogenous fumes from putrefying flora instill feelings of abject anguish.  This is a place of phytopathological and invertebrate devourment. A place of putrefaction. A place of death. A place……..Of Worms.

The American west coast is presently teeming with deft purveyors regarding the aural expression of this grotesque art.  Crematory Stench, Encoffinized, Ascended Dead, Fetid, Kommand, Ossuarium and Thanamagus to name a few.  The debut recording by Seattle, Washington’s Foul is no exception.  “Of Worms” imparts feelings and imagery associated with the most dire times.   Feel the dread. Feel the anger and denial. Feel the transient, erroneous glimmer of hope.  Feel death.

Foul pilot a heterogenous approach to elicit these feelings acutely in the listener.  From painfully slow to mid-paced destruction, their variety of sewer tinged Death-Doom is deftly maneuvered.  Think Torso or Carcinoid with extended funeral dirges.  Or Caustic Vomit with less Undergang style vocals.

Much of the album showcases a typical Death-Doom tempo such as what one would see with the likes of Spectral Voice.  However, there are unexpected transitions to sinking tar pit pacing as seen in the beginning of “Sorceress of Worms” as well as the measured length of “Writhing Tectonic Bicephalith”.  We aren’t talking 83 lamentations that you would encounter on a Bell Witch album, nor does it get to drone speed;  But, some sections laboriously claw their way.  Painfully slow, in prolonged requiem.

On rare occasions, light trickles in slightly through the darkened ceiling with brief melodic tones as beheld midway through “Sorceress of Worms”.  Yet, the reprieve is neither bright enough to be consider sunlight, nor long enough to brighten the mood with any significance.  The transient dappling of shadowy moonlight seems only the increase the weight of death to follow.

I could not find fault in the production,  as the recording seemed to elicit the appropriate emotions I expect was intended.  Guitars lacerate, drums bludgeon and bass crumbles petrified remains. The instruments complete their macabre duty with aplomb.  I also found the vocals tremendously well done and a high point; Bilious, distorted lows through ulcerated chords with occasional higher register rasps wound the freshly fertilized soil.  The songwriting itself is to be equally lauded, as the journey was a completely cohesive descent into the dirt.

Foul has made an excellent contribution with “Of Worms”, and is certainly a band to look out for.  What the Earth gives, the Earth takes away……birth, growth and maturity……to decline, death and decay.  (Chris Topher MC)