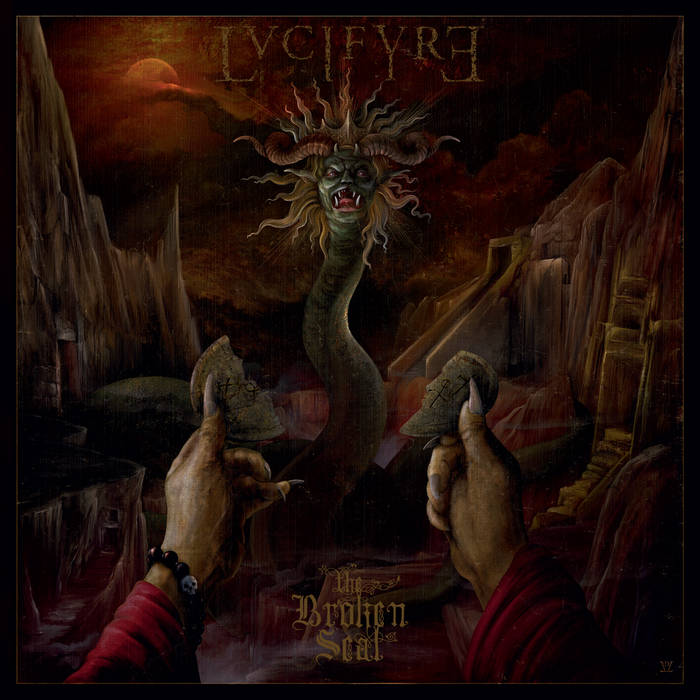 If there ever existed the chronicling of a doomed soul that was casted into the nine hells of the eternal flames, I would believe the perilous journey through each cavernous depth would be the sounds which reside within this album, for each track emanates the feeling of one whose essence has been subjected to every perverse, vile and torturous torment as the serpentine fire consumes the decrepit wisp of life that once was. Yes, Lvcifyre are back with their upcoming third full length album, titled, ‘The Broken Seal’, on Dark Decent Records which will be unveiled on September 10th 2021. If you are not familiar with Lvcifyire they are a Black/Death Metal legion hailing from the UK, formed in 2007, since their initial conception the band has forged two albums and two EPs, with ‘The Broken Seal’ being their third album. Now you are probably scratching your head in confusion as to the description prior to this…let me summarize, the strength of Lvcifyre is not in the musical prowess that is discharged from every chord and beat, no, it’s culmination of drawing together that energy which rots the light and devours the silver threads that tether one from slipping into the abyss, in other words it is pure chaos in its most unrefined form.

Now let’s address the first positive….the production on ‘The Broken Seal’ conjures a ritualistic element to each song, however the beauty lies in the cacophony of noises that presents itself in a maelstrom to the listener. What is meant by this is that the album itself unleashes a wall of unrelenting chaos towards to the listener, perpetuating an imagery of someone who is descending into the labyrinth of their own mind as mental decay takes ahold, rotting away and infecting each thought until all is left with is a seething mass of voices snarling and intertwining into each other, so too does the production engrains itself into the musical elements. Take for instance the track, ‘Black Beneath The Sun’, the mix that is infused here doesn’t just accentuates the overall instrumental experience, it instead fortifies the density of the atmosphere that is already crafted as well as Inject the feeling of pandemonium with its legion of sound. Now it’s not to say that the album gives off the impression as being unprocessed noise, no…. you can still discern the intricacies of each instrument and the technicality behind them, but instead of focusing on that, the production instead enhances the aura that is brought forth organically by the cluster of notes, like an already pulsating wound, the production just finds the correct vein to ensure the blood flows more.

Where the production helps to facilitate a medium for the spirit of this album to possess and lurk within each track, the instruments serve as the breath of life that clings to this wraith, twisting and transforming it to the sounds that are rung forth. This acts as another highpoint towards, ‘The Broken Seal’, as the amalgamation between the drums and guitar churn out a plethora of sinister tones with the use of alternating tremolo picking coupled with obliterating blast beats and fluctuating drum patterns. ‘Headless Rite’ is a perfect example which demonstrates this fusion between the strings and the percussion, listen to the intro of the track, even though the arrangement may seem simplistic, it’s the baleful ambience that is expelled from the instruments throughout the song as well as the album, since it puts more focus into the visceral mood and shapes that can be created, however, this does not mean that the playing suffers, quite the opposite, instead of putting forth technical sounding patterns for the sake of sounding intricate instead the aura that Lvcifyre evokes demands the complex playing. In other words the, the complexity is a byproduct of the diabolical shroud that is woven by the musical aspect. If a picture were to be envisioned with the alliance of the strings and percussive elements, one would imagine a damned soul within a lake of endless flames that cannot be quenched, with the cries and scent of searing and boiling flesh as the perilous soul is being ripped apart slowly and agonizingly.

If the instruments erected the landscape where the flames are alive and the bodies are perished, the voice that flows through this album would be the dominant, mighty figure who resides within this pandemonium and casts the judgment. The vocals in my opinion crafted the imagery of a malevolent being upon a throne of withered bones whose head is adorned in an ebony crown as he surveys his dominion and the tormented souls that inhabit its space. The voice that is spewed forth is enough to bring forth the spark of life to an ember with its tongue tinged of sulphur.’Tribe of Khem’ and ‘The First Archon’ are songs which showcases this ability with the Death/Black Metal register chosen and it’s rather effective as it melds itself within the wall of sound and permeates and pulsates through the album like a volcano that spews forth lava upon a barren land, slowly devouring everything in its path.

So…what’s the verdict? Overall this is a perfect album, and like I’ve said in previous reviews…in my personal opinion if a band can foster that unsettling and hellish atmosphere without relying on imagery or symbolism then that’s sheer talent in my book, and that’s especially what Lvcifyre does with ‘The Broken Seal’. The spirit that resides within is created organically and flows and meanders taking form towards the emotion of the tracks and that’s one of the most important aspect on this album…the music speaks for itself, as it takes the mind and its senses through a journey throughout its chambers where the walls and paths are ever-changing evoking that feeling of mysticism and mayhem in every corner. That being said, I’d recommend this album to ALL Metal fans as it’s one that should not go under the radar for this year. (Justin Joseph)