Faceless Burial – At The Foothills Of Deliration 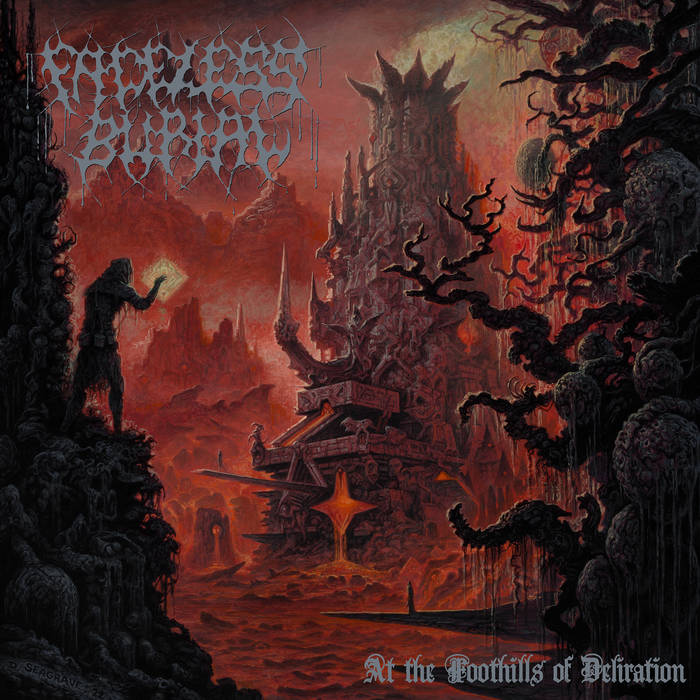 With ‘Speciation’, the Australian Death Metallers shook off their early-stage darker branded Death Metal, not much was left of their former Blackened edge nor of the dark atmosphere that typified those first recordings. With its follow-up, ‘At The Foothills Of Deliration’ they fully live-up to its title, giving the listener an almost delirious experience of expertly crafted technical Death Metal.

Compared to ‘Speciation’, this new album sounds rather dry, which again gives the band a slightly different twist and making Faceless Burial a highly versatile and unpredictable entity. What remained is their ability to pull off Death Metal in its most technical form, yet not without forgetting to writing actual songs. It is still not a collection of several fast riffs piled up, they are also not exclusively into extremely fast territories. Instead Faceless Burial knows how to keep things in balance and not to overload the listener with stimuli. And because of their Incantation-fashioned base, it clearly has a different starting point to build their technical Death Metal upon compared to a band like Origin for instance, that has more of an obvious stripped-down version of the technical Death Metal brand as its mold. The atmosphere, just like on ‘Speciation’, has been marginalised for the most part, but not completely erased from Faceless Burial’s musical palette, which allows them to offer something different compared to most of their contemporaries. Yet, due to the shifted focus on the technical aspect of the music, the atmosphere is of less importance when compared to the band’s earlier records.

The musical comparison of a jam session of Gorguts and Incantation is still largely intact, but on ‘At The Foothills Of Deliration’ Faceless Burial seems to push its boundaries even further, challenging themselves to address their musical abilities on a technical level, yet still able to strike a balance in its ingenuity and listenability. On this new effort the band passed the test with flying colours, but it also feeds the question on what to expect next.