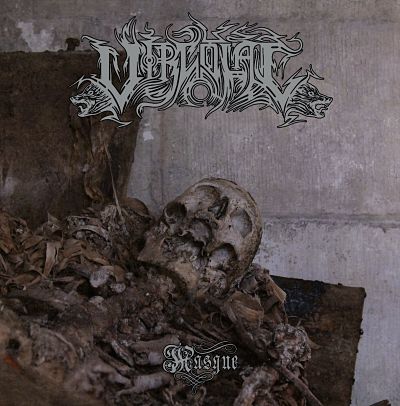 The old Eire. Vircolac are spreading their filthy brand of cavern Death Metal since 2013. The werewolf, in Romanian language, released 2 demos and 1 EP so far. “Masque” is the debut album, and to me their best effort so far. The sound is ugly, disturbing, twisted, smells of graves, of wounded soldiers and dark ages of humanity. The lyrics are according to the promotional text, „Thematically…the album reflects two different strands of storytelling, with side A adopting a starkly defiant tone throughout and side B takes a moodier assessment of the obsequious venality that governs the world we inhabit and inherit. The conclusion of this being the mass industrialized slaughter of much of Europe’s young in the great war.“ Perfect for a Death Metal record right?

In terms of vibe I found myself thinking of bands like Carcass, Morbid Angel and Necrovation when it comes to brutality and aggression. In terms of dynamics and otherworldly elements I heard band like Tribulation, Necrovation (again yes), Cadaver or Obliteration. The use of single string picking with distortion and clean guitars isn`t new but it is well written and incorporated into the overall sound of the album. Each bandmember did an excellent job and each listen reveals new details and new fragments of this cryptic Death Metal which got an obscure, strange feeling and atmosphere. While in the same time it has memorable moments paired with brutal, savage rifforgies.

The production is kick ass, taking advantage of an excellent bass sound and performance of each member and balancing everything that nothing is buried without going for a sterile sound. Vircolac reached their peak with their debut album so far and succeeded by far with this album for being the first full length. Sláinte! (DPF)