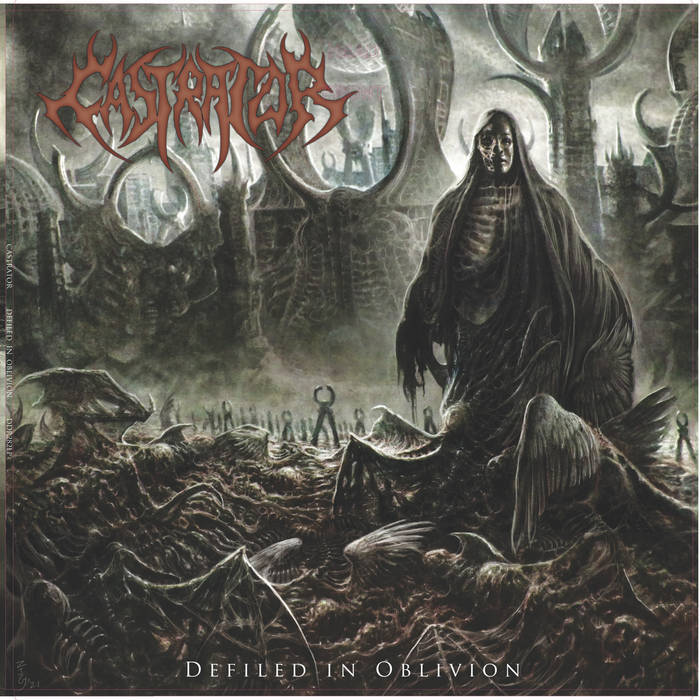 Castrator is a Death Metal band that hails from New York City, however the band originally hailed from all over the world; from countries such as Mexico, Norway, Sweden, Colombia and of course, the US. (Though now some of the original members have left the band and Castrator has a more US flavour) The bands debut album entitled ‘Defiled in Oblivion’ has been released across all formats by US label Dark Descent Records, and it comes a full seven years after their last release, a 2015 EP entitled ‘No Victim’. All female bands are not common but this is one who seems determined to stand the test of time, and woe betide anyone who pisses of a group of ladies calling themselves Castrator!

‘Defiled in Oblivion’ is not a delicate album. It has a clunky unpolished savagery to it; an unrelenting heaviness to the punishing drumming style and thick, meaty riffs that simply doesn’t take any prisoners and has no time for bullshit. As each track plays out and enters into the annals of Death Metal history, this album grows in terms of unbridled barbaric savagery and uncouth, pugilistic vulgarity. The vocals are vociferous and aggressively growled, the riffs uncivilized and monstrous. And yet Castrator are adept at the technical flourishes and varied tempo changes that are the hallmarks of al good Death Metal bands.

If you want to pass a little time in the company of some violent and uncompromising Death Metal, that pummels and pulverizes but also wails and wanders through darkened melodic avenues, then Castrator are the band for you. The cover song to finish up the album makes experiencing ‘Defiled in Oblivion’ in full worth while too.