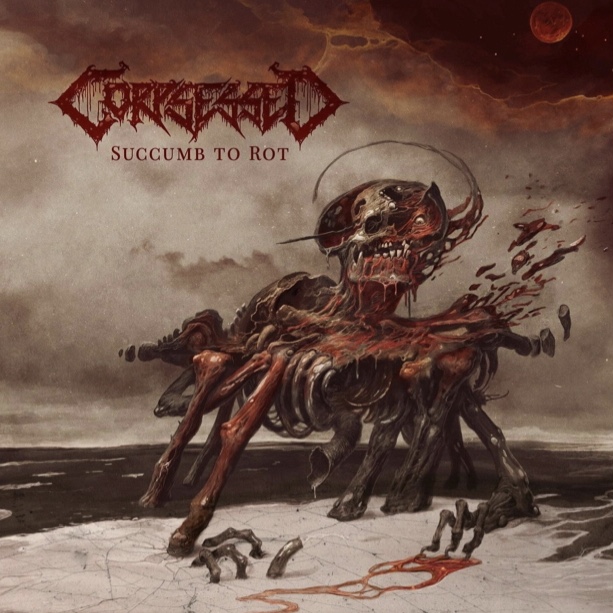 With Death Metal bands like Abhorrence, Amorphis, Demilich, Demigod, Purtenance, Funebre and Convulse the Finns do have quite a legacy, but around the turn of 2010 a whole new generation of Finnish Death Metal bands took the stage. One of these bands was Corpsessed, sprung out of the mind of Matti Mäkelä – who was already in the cult Funeral Doom bands Tyranny and Wormphlegm.

The brand of Death Metal that Corpsessed serves is in fact a good blend of rather typical Finnish Death Metal and the abyssal sound of Mäkelä’s Funeral Doom endeavours. From its first EP, ‘The Dagger & The Chalice’ (2011, Me Saco Un Ojo/Dark Descent), up to this third full-length album, Corpsessed deepened and perfected their sound to this huge and all-devouring cthulhian monster. It is less grinding but leans more on haunting dark riffs and thunderous drums, something that brings Corpsessed closer to a band like Dead Congregation than to, say, Purtenance or Convulse. Soundwise it is also not a part of the now rather popular ‘cavernous’ Death Metal sound. Which is rather refreshing as I tend to state that the whole cavernous Death Metal sound is starting to wear out as most bands are pretty much interchangeable. In fact, Corpsessed has found a somewhat perfect mix of dark and pulsating riffs, that are both heavy and rather classic sounding and a dense atmosphere that fluently go hand in hand with the crisp and equally dark production. And on that note, Matti Mäkelä proves himself a more than capable and qualified technician as not only his musicianship improved, so did his production skills with this ‘Succumb To Rot’ being his best effort so far.

The current Death Metal scene is clearly pretty much overcrowded with too many bands sounding too much alike. This musical environment makes it hard for bands to stand out, a classic example of ‘too much of a good’. And though I am confident that many people will find their ways to Corpsessed and this new album, I am also afraid that it might be overlooked by too many – in the end you can’t listen to all those bands/albums, let alone buy them. And that is a shame as Corpsessed proves to be one of the best bands in the genre and anyone how liked their previous efforts won’t be disappointed by ‘Succumb To Rot’. (FelixS)