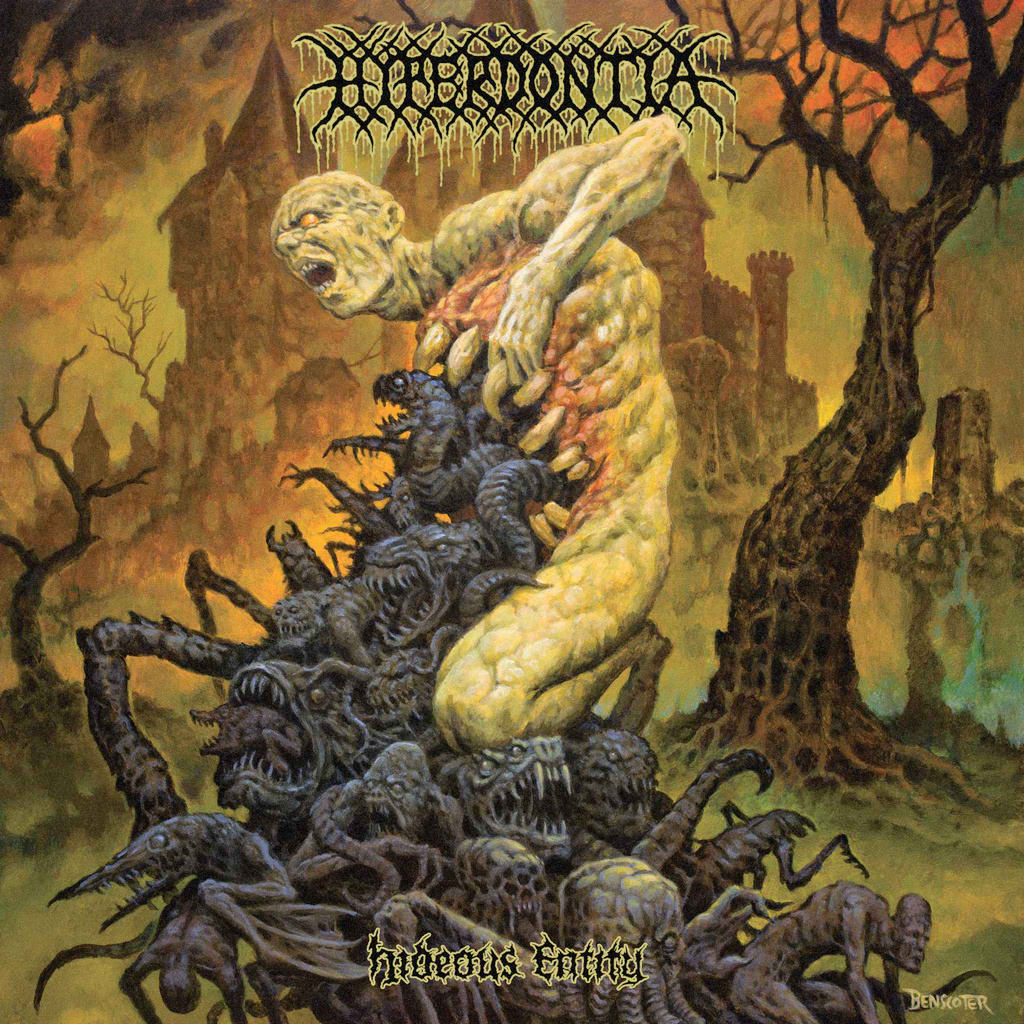 “Hideous Entity” is the 2nd full length from the Turkish/Danish death metal merchants “Hyperdontia”. After the release of 2018s full length “Nexus of Teeth” and 2020s EP “Excreted from the flesh”. Dark Descent, Me Saco un Ojo and Desiccated Productions have unleashed a front to back crusher.

Soon as the opener “Snakes of innards” kicks into gear you know that the 8 songs (the perfect album length to in my opinion) you are about to hear will be a menace of blasting, tremolo guitar and vocal war. No fat on these riffs in the slightest, pure muscle. Drummer Tuna implements a free flowing style that sounds as if it’s being made up on the spot almost, changing the drum patterns to infect a change of style into the riff that’s over the top. This man knows the rules, which is why he is so successful in breaking them to create a style all of his own, casting “Hyperdontia” into the top tier of the underground.

These riffs provided are top class and plenty to enjoy. Easily holding up to any band that wants to take them on. Each songs is put together without any riff salad type arrangements. Listening to songs such as, “Grinding Teeth”, I was overpowered with the urge to punch passers by then circle pit in the midst of people attempting to carry out daily tasks. The middle drop riff in “Lacerated and Bursting” is as catchy as you make such frenzied music, Guitarist Mustafa drops in some tastily done leads, almost “Slayer” Style, to pull in a melody from the chaos. You’d be hard pressed to find a band that makes death metal so catchy, insane sense of a good hook, which makes you want to listen again and again. Mathias Friborg’s bark dominates the party here too, giving a vocal that refines the “Hyperdontia” sound to an entity of domination. Over in Scandinavia metal must be a compulsory subject in school or some shit, too many good bands!!

The labels have their finger on the pulse releasing Hyperdontia. 10/10 on every front, not that I expected less after “Nexus of Teeth” and excreted from the flesh, both which I play a lot. Metal up your ass! (Skye_Dogg)