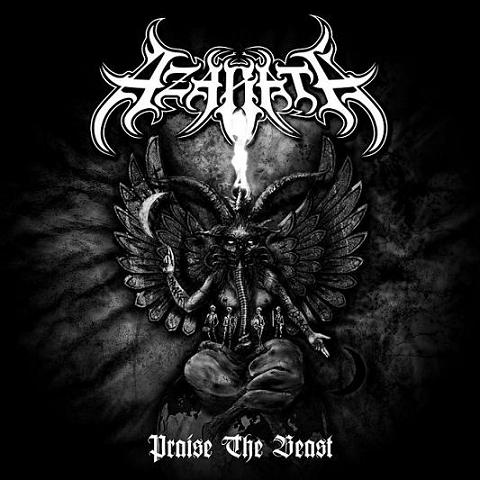 It seems there’s something in Poland’s soil that’s good for Extreme Metal! I’ve heard a lot of great stuff from this country recently and new Azarath comes as a steaming web of intestines on a cake! I must be honest (for once) and confess to not listening their previous works, although their other bands (Behemoth, Damnation, Yattering) are well known to me. To this confession I owe the fact of my lower jaw dropping slightly during some moments of this album. It’s a fact that my player was aching for some more top class Death Metal recently. New releases I got my hands on weren’t satisfying and most of the old materials started to bore me, so it was down to few early Dismember and Cannibal Corpse albums (Morbid Angel are out of count, they play in their own league). But, this one “Praise the Beast” is about to change that.

Well, after this overdue ejaculation I should make you familiar with the music on “Praise the Beast” I guess. It’s nothing more or less than a pneumatic driller of brutal, Satanic Death Metal, bordering with both Black Metal and technical Death Metal. Crushing guitar riffs, precise, brutal and penetrating your brain like 10 inch steel nails. Riffs are neither too simple, nor too technical. Guys have correctly guessed their measure to sustain high intensity but also retain melody and at certain moments even the atmosphere. It’s all followed by elaborate drumming, hits vary in accordance with demands of the moment and they always get to be exactly as they should, be it hyper blast beats, double bass roar with slow snare drum, or some other combination, and on top of that they are interestingly varied. And then come the vocals like a clan leader directing thousands of mindless and merciless minions into battle with inferior enemy. It’s undisputedly commanding, brutal and irresistible. This is nothing brand new, it will remind you on latest Behemoth, or Vader, or even Infernal War and there are many similar bands of this kind in Poland and elsewhere, but Azarath do deserve the hotspot at the moment. Songs are structured without any fault, fast and slow(er) parts are exchanging on time, they haven’t lost my attention for once. I really can not recall when was the last time that I learned a chorus of a Death Metal song during my first listening of it, but that was the case with “Queen of the Sabbath”. That song has such a powerful chorus with choral growl chanting that chills went down my spine instantly. Many hails should be sent to the sound engineering guy (Arkadiusz “Malta” Malczewski) who packed this all so neatly guessing and then enhancing the essence of Azarath’s sound.

Finally, if you like Death Metal one bit, don’t hesitate too much, this is one great album that is guaranteed to make you hold your precious air guitar like a top of the class teenager! (MarkoS)