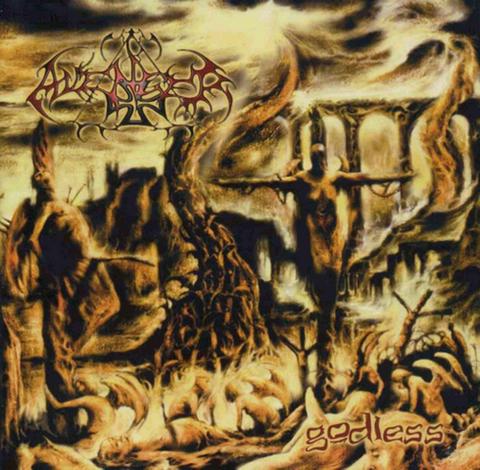 More than a decade ago Astaroth was born, yet changed its name quickly to Avenger in ’02. A year later the now four-piece revealed their first demo entitled “Eternal Voices Of Hell”. Gigs were made for the first time and the band even got hold on performing at several festivals with their own music, but also with covers from Krabathor, Master’s Hammer and Obituary. Around this timeframe members within the line-up came and went. In total, the vacancy of molesting the bass were to be changed from the beginning ’till the end seven times! In October ’97 Avenger finally succeeded with finding suitable members. The “Shadow Of The Damned” demo was to be released – through the American label Breath Of Night Records – at 1,000 pieces. One year later proved to one of the best in Avenger’ history for having various performances planned in whole of Europe. The year that followed in turn was one of their worst, due to the fact of line-up changes once more. Despite these happenings the band recorded “Godless” in ’03 and was released by Deathgasm Records (USA) at the end of that same year.

Sacramentum memories passes by as ‘Enter My Darkness’ introduces itself. This instrumental intro – as well as the outro ‘In The Death’s Embrace’ – is composed with sincere dark feelings. While ‘Even To The Bones Marrow’ is almost finished it becomes clear the music Avenger creates can be acknowledged as heavy death metal. Of course the black metal influences appear through the rough and howling chants. Usage of that enticing reverb gives the distant sphere extra depth. Translations may be in order though, because the lyrics are in pure Czech. When having listened to the whole ensemble Avenger has to offer, it’s safe to say they produce dark heavy death metal first class. From time to time some technical aspects popup in the veins of old In Flames. Therefore the band consists of skilled musicians, especially the drummer and guitars player. Personal favourites are definitely ‘Even To The Bones Marrow’, ‘Before Storm’ and ‘Godless’, due to their aggressiveness and old-school approach in the black/death metal genre. Overall a pretty raw atmosphere is recorded with a heavy production, which are both perfectly suitable for this kind of music.

Avenger is original and stays direct to their own style; a feat not so much seen these days. Aggressive death metal licks flashes by along with some more detailed variations. Review conclusion; a worthy band to keep in mind. Hails to the crushing from the Czech Republic or whatever they call it these days. (ManuelB)