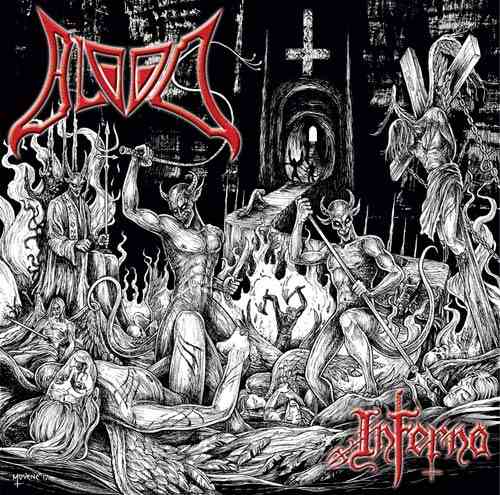 The eight studio full-length from German metal band Blood has been re-released in October 2018 through the F.D.A. Records label, but only in a digipack cd-version, while originally released in 2017 (independent) and only in cassette or 12” vinyl version. Readers who hear a bell ring with this band name: since 2003 this band hasn’t produced new stuff, so after 14 years they re-appeared in the scene with this new album. So first of all, welcome back Germans pit-bulls!

This band mixes different metal styles, where grindcore and death metal are the primal influences. In their sound I recognize some Carcass and Napalm Death pieces, but overall seen this album tends more towards a death metal album, however most tracks only have a duration of approximately 2 minutes. Only 1 track transcends that duration with a total length of 3.39 minutes, but the outro steals some seconds to stretch this track. The deep vocals from Martin, combined with the screams of co-vocalist Chuck make this a album with several layers, and the riffs used in this release are true adrenaline shots. Production wise everything fits perfectly and all instruments are good in the mix, an issue that has been upgraded over the years. With only 28 minutes on the clock, I must admit that this albums is over in a blink of an eye, but what you’ll hear is worth it!  Title track ‘Inferno’ shifts between speed and midparts, and the punky riff in this song is topnotch! Not only new songs are to discover on this disc, cause 1 track was dusted up again and given a nice boost – track ‘Christbait’ from album O Agios Pethane. The song that grabs me the most by the balls is definitely ‘Impulse to Destroy’, it’s just savage and striking. If you have some spare 30 minutes, then use your time wisely and give this one a shot. (Fredde)