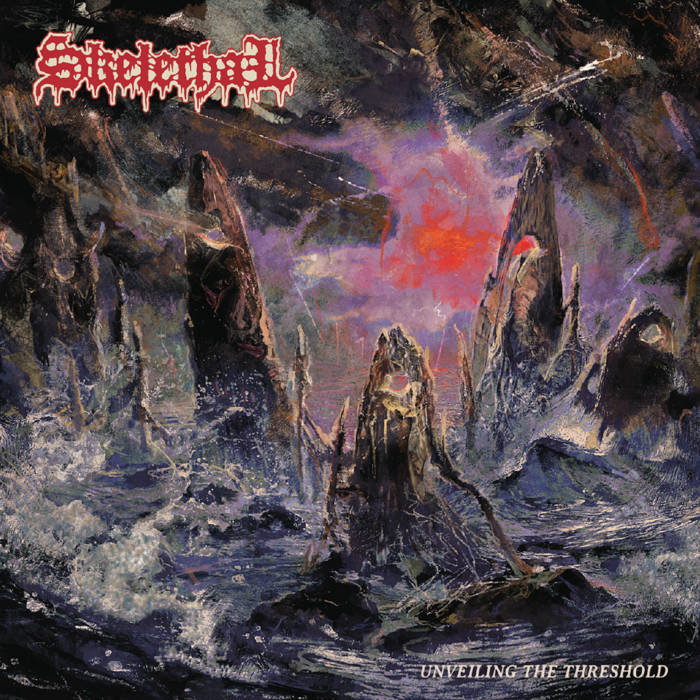 The French band Skelethal from Lille, was founded as a duo in 2012 and has grown into a stable quartet over the years. After debuting with a demo “Morbid Ovation”, then they released a split and two EP’s. After five years from the beginning, their official debut full-length “Of the Depths…” was released in 2017, followed by another split with Cadaveric Fumes in 2019. Quite interestingly, in the following year of 2019, another 4-track bullet “Antropomorhia” was released independently by the band!

All this background proves one thing – the French maniacs were devoted, steady and took their art seriously, which can be found in their varied and solid discography, that built within limited time period. Maintaining their robust and offensive production line alive, on November 20th they will release their second full length “Unveiling the Threshold”, in co-operation with longtime collaborator, Hells Headbangers. And, without any dissatisfaction, they have stayed true to their way and played obscene and indecent Death Metal with an uncanny dark mood.

An effective blend of early Swedish Death School, also pinches of early US Death School and Grindcore delivered here; that’s sound raw, authentic and charged with insanity. Also, powerful, dark voice roars the lyrics with no ultra-deep gurgling, no squealing but classic Death growls! This diabolical mixture was poured into a natural-sounding mold, far away from highly polished studio products, where computers and triggers polish everything smooth and artificially surge it up.

The disc contains eight tracks (including two from the 2019 demo), played in a hammering time of 37 minutes. Begins with storms that’s sends shivers down the spine, “Sidereal Lifespan” sounds almost like listening to a lost classic from the old times. From there, going deep into the record with ‘Emerging from the Ethereal Threshold’, ‘Repulsive Recollections’, ‘Cave Dwellers’, ‘On Somber Soli’ till the end with ‘Abyssal Church… The Portal Revealed’, renders strong and varied materials that oscillates between up-tempo parts, doomy passages with epic solos and short grind eruptions.

However, beyond these common terms of explaining the sound; the truest essence, spirit and energy is actually lurking among all the transitions and movements, likely of trusted traditional ways, that freezes everything also equally rushes blood in full force – what actually ‘unveiling the threshold’ meant to be. Without any doubt, such a strong organic sound and live atmosphere that was captured by the band, by no means an accident or blessing. The recording was done under their own direction and then, Greg Wilkinson from Earhammer Studios (Autopsy, Necrot, Undergang, Vastus, Ulthar,  Bloodmoon, Cardinal Wyrm, Cartilage) was responsible for the finishing touches, which explains the quality and effort behind.

Finally, a true master of the guild, that possibly be engaged for the visual design of this statement second work, none other than Eliran Kantor, was responsible and visualized this wild ride on left paths and towards thy depth! Beholding all these, the album will be released as LP, cassette, CD and unquestionably needs and deserve many spines to experience its fascinating revision onwards those morbid paths.

To all exposed ones, it will undoubtedly be regarded as one of the strongest tradition keeper record erupted from the forever enticing French underground in modern times. (Randolph Whateley)