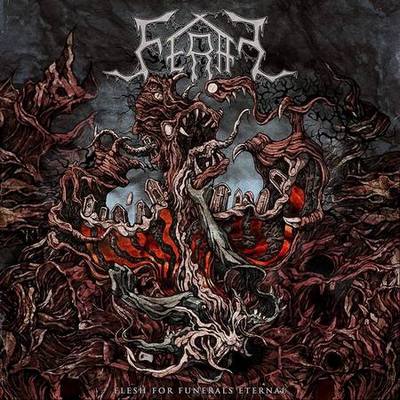 Unquestionably significant in it’s influence on the Death Metal genre, Sweden has maintained it’s stellar reputation as a hotbed for extreme talent for several decades. Drawing inspiration from these pivotal local legends, Feral formed in the Northern Swedish city of Skellefteå over a decade ago (in 2007), releasing two well received full length albums (“Dragged to the Altar” (2011) and “Where Dead Dreams Dwell” (2015)) and several EPs in their career so far.

Without wasting a single second, that familiar wall of HM-2 corrupted noise erupts triumphantly, rarely giving a moment for rest throughout the 41 minute long opus. Dynamically orchestrated, the composition tends to focus largely on the intensity of the rhythmic musicianship as opposed to extravagant lead playing or technicality. Connections to bands such as Unleashed, Dismember and naturally, “Clandestine”-era Entombed are affectionately obvious and utilised with great respect to them. Seamlessly transitioning from rapid tremolo picked blast sections to breakneck stabs to slightly slower groove patterns, the rhythm section prides itself on accuracy despite the chaotic distortion.

Perhaps the most notable evolution from their previous work is the more professional sounding mix, allowing each instrument to take centre stage (even a clearly audible bass track) and accentuate the layering of the instrumentation underneath the guttural growls. The drums in particular shine out as an improvement from previous works, in both their clear presentation and their excellent performance.

Another superb find from the eternally consistent exhumers of underground talent Transcending Obscurity Records, Feral’s third full length is a well produced blast from the past that delivers in it’s performance but perhaps misses out a little in it’s variety. Although innovation may not be a prevalent factor within this release, it’s strength lies in it’s dedication to the style, it’s passion for relentless heaviness and authentic heritage. (MD)