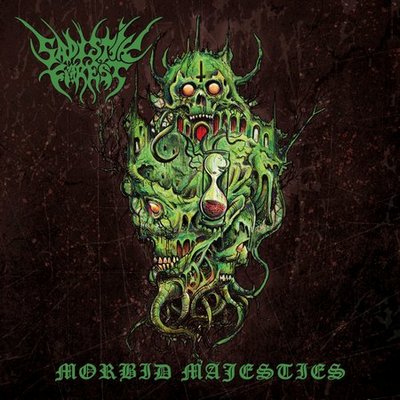 Sadistik Forest is about to release their third album “Morbid Majesties” and it’s an unrelenting torrent of high octane, punch you in the throat death metal. It’s fast and heavy with wailing technical guitar solos and deep gutturals, everything that a death metal fan could want. Touches of classic death metal, merciless drumming and smooth pronounced basslines round out this highly satisfying album. This is the standard hair spinning, neck breaking, crush your buddy in the pit music that has been defining the genre since it’s conception. Violent and brutal, this is ruthless Finnish death metal at its finest. Started in 2007, Sadistik Forest burst out into the Finnish metal scene destroying everything in their path. With occasional nods to thrash metal and black metal, Sadistik Forest have devoted themselves to playing unapologetic riff-based metal and doing it well. This auditory assault is full of crushing intensity and a display of furious aggression. This is the third full length from the death metal maniacs following the debut self-titled in 2010, “Death, Doom, Radiation” (2012) and a split with Septory (2013). Maintaining a fairly consistent lineup since the beginning, Sadistik Forest is making a name for themselves on the underground scene both locally and abroad. (Kaje)