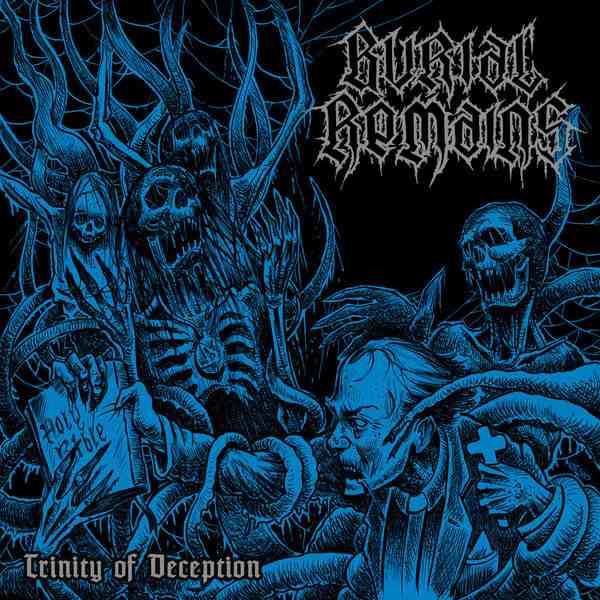 Burial Remains formed in 2017 (2016 if you count their time as Miasma of Guilt), and hail from the Netherlands. Their debut “Trinity of Deception” has just been released by Transcending Obscurity.

On offer is old school Death Metal with “that” Swedish HM2 tone (though the guitars riffs are quite audible, especially the buzzy upper mid ranges which makes me wonder if it is the Boss HM2 or a clone pedal or Kemper profile?), not that it really matters unless you’re a tone nerd like me!!! The songs on the whole remind me of latter day Dismember, predominantly mid paced with the odd doomy stomp interspersed with rapid blast beats.

From the epic (almost Blot Thrower) intro of the first song “Crucifixion of the vanquished”, through the intensity of “They Crawl”, the horror of the eerie piano section and anti-Christian themes of “Trinity of Deception” right to the last blood curdling screams of “Burn with me” and the chorus chants of “Tormentor” Burial Remains have delivered a fantastic cold slab of Swedish style Death Metal.

The production is very good, and really helps to deliver the intensity of the recording whilst keeping everything balanced and audible. The vocal performance is excellent with ferocious death growls, yet you can here the lyrics! The drums just pound, and the guitar riffs are dark yet melodic. The solos are simple and effective and devoid of unnecessary wankery!! Also there is a big fat rumbling low end due to the bass and kick drum duo.

If you’re a fan of Swedish death metal and love your Dismember you won’t go wrong with this!! I can’t wait for more… (Godless)