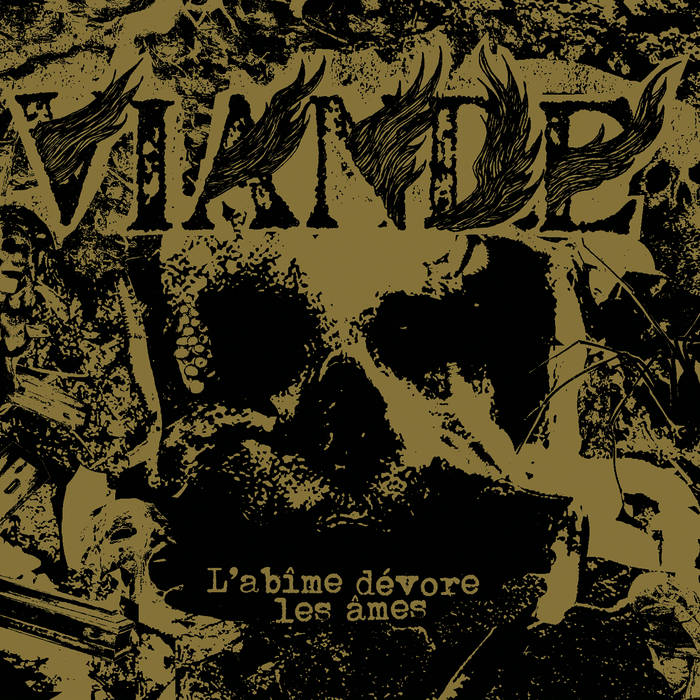 Nietzsche once claimed that ‘Stare into the abyss and the abyss will stare back at you’ to describe how the persons darkest parts will eventually devour his thoughts and lead him into madness. And here is an album that does that on the musical level of things, which, funny enough is obvious from the albums title that stands for ‘The Abyss devours Souls’.

This is the debut full length by French dissonant Death Metal trio, Viande, who have prior to the full length released a demo (simply titled “Demo 2015”) and an EP (“A la Mort!” in 2017) and after that retreated into darkness to create one of the darkest masterpieces of this year.

There’s no unnecessary ingredients here, a few changes in pace, but since it is almost impossible to  successfully combine cupcakes with darkness, they are not even needed. From the disturbing opening on ‘Les Dents du Gouffre’ on, a dense atmosphere is built, showing how you don’t need to be ridiculously fast to give your listener that suffocating feeling. While the drums build solid death metal foundation, the guitars lay over a layer of impending doom through dense riffs, accompanied by an incredibly thick low end bass. Hearing vocals in such a thick mixture is occasionally difficult, but that builds up the dark atmosphere even more, as all of the elements actually work together, without becoming melodic (as that is one of the terms for describing music I sincerely dislike).

In the past couple of years, when the world went through historical moments literally every day, many artists who play disturbing, dark, plain brutal and violent metal were unearthed, maybe as a reflection of the current situation around the beholder / artist or maybe even because there was a certain need for music like that (even though there have always been fans of dissonant and dark music, but never as many as there are now). But mark my words, if you’re new to this kind of music or you’re just starting to delve into it, don’t start with this album. It might be a bit too difficult for you. Not a lot of things you stuff in your ears can prepare you for that kind of soul devouring darkness that is served here. (Black Mary)