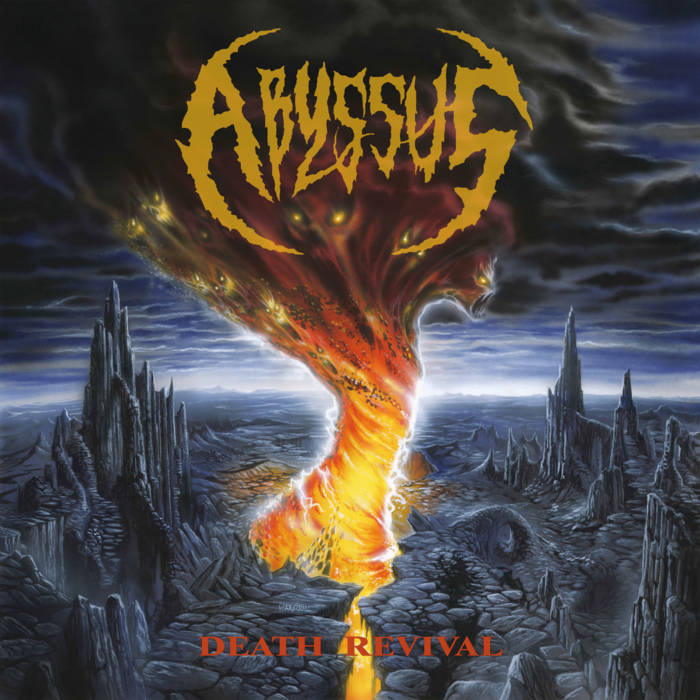 A band with an old school mentality, Greek Death Metal band Abyssus may have been a little spartan on the album front, but they make up for it with myriad of EP and split releases. ‘Death Revival’ is their sophomore full length and it’s been seven years since their debut, ‘Into the Abyss’. Initially unleashed on CD, a 12″ vinyl has since followed and all through Transcending Obscurity Records. What I wasn’t expecting was for opener ‘Metal of Death’ to treat me to some good old fashioned Death/Thrash. The vocals have more than a little Lemmy influence to them, being as they sound like an alcoholic being strangled (In the best possible way of course) whilst the flowing guitar solos and technical leads thrown into the pot liberally are also a nice touch. Essentially this is Old School Death Metal but with a decidedly early 80’s Thrash Metal mentality. As the album progresses a more Death Metallic grip is taken but that Thrashing element is always doing it’s thing just under the surface. Something else I wasn’t expecting? An Eastern sounding strings intro melody into ‘Genocide’ but again it’s a welcome addition. Funnily enough it’s during ‘Genocide’ where Abyssus really open up the taps on the extremity and let loose with a flurry of furious Death Metal chops. All in all, ‘Death Revival’ is a powerful sounding album, superbly produced and performed with admirable technical flair whilst also keeping things fast flowing and savage. The Greeks certainly do know how to produce extreme barbarity when it comes to Metal and Abyssus are up there with the best of them. (Luke Hayhurst)