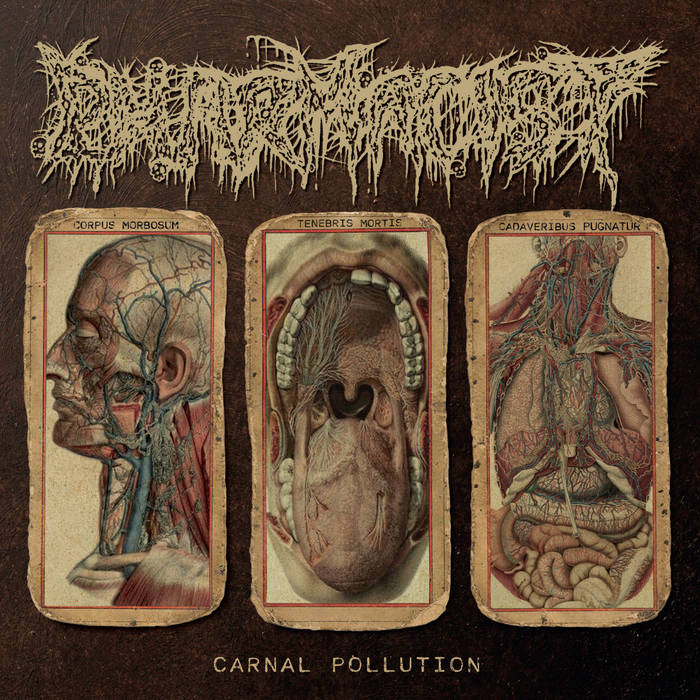 Over the past two plus decades I have encountered an seemingly endless stream of Carcass-influenced bands. They all do differ quite a bit in quality, some bands tend to add only a bit of Carcass to their sound while other are clearly worshipping their sound and one band focusing more on the pure Gore Grind period of Carcass, the other more on the later Death Metal oriented work. However you look at it (or listen to it, better), Carcass is undoubtedly one of the most influential bands in the history of extreme metal. And one of the most recent additions to the list of Carcass worshippers is Japan’s Pharmacist. Formed in 2020, the band have been releasing their Gore Grind/Death Metal blend in a relentless tempo ever since.

‘Carnal Pollution’ is one of the band’s latest recordings and is presented on 10” vinyl, cassette tape and CD by a wide range of different labels and should be available through those underground distros everywhere on the globe. And, it would be good idea to dive into the world of Pharmacist if you are a fan of Carcass.

The Japanese duo do tend to blend Carcass’ trademarked gory sound as well as their more tightly played and grooving Death Metal into one big rotting pile of cadavers. It has both of that gory sort of blubbery sound and the those tight riffs the band had on their ‘Necroticism: Descanting The Insalubrious’ and ‘Heartwork’ albums. The fast-paced, dual-vocal Gore Grind goes hand in hand remarkably well with those guitar leads and catchy riffs. In fact, I dare say, that, despite not quite being the only one trying, Pharmacist might very well be one of the best Carcass-worshippers I ever heard.