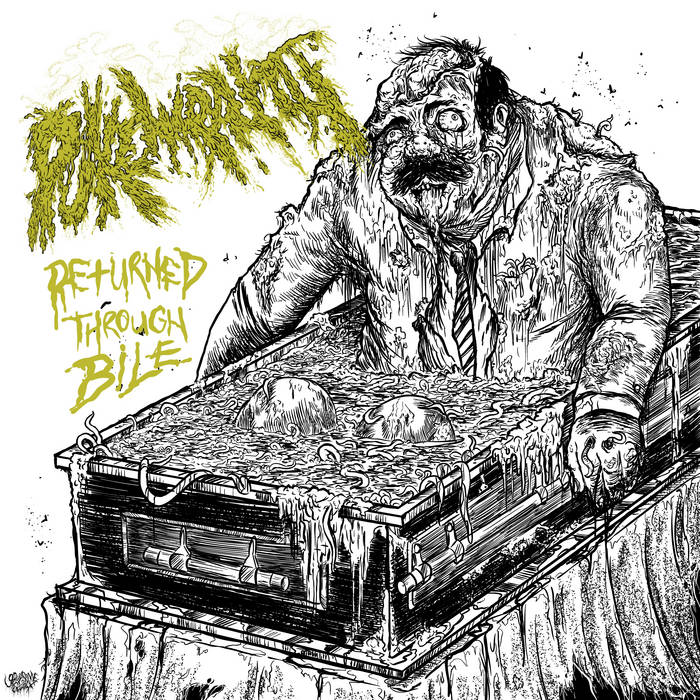 Pukewraith is the solo Death Metal project of Brendan Dean, who is active in various other bands and projects, with Fumes and Gutvoid being the best known. The first offering of Pukewraith is this 3-track EP with a playing time of just under fifteen minutes.

What Dean is presenting here is rather simple and grooving Old School Death Metal with all the gory themes. It is bass-heavy and with a leading role for his low gurgling vocals. Basically this is a bit of a mix up of Autopsy and Jungle Rot, using the same grooving riffs and drum patterns of Jungle Rot and the filthy guitar tone of later but pre-reunion Autopsy. The production, however, is a little flat and thin, which doesn’t give the tracks much of a powerful drive or punch. The overall sound does not benefit from the very digital sounding (programmed) drums either. What does give the music a bit of that extra swing are the Slayer-esque solos, which are added here and there. They sometimes feel a bit out of place though, but it does give the music a bit of an own identity. While listening to ‘Returned Through Bile’ it is obviously clear that Dean has some really nice ideas and that he has the required talent for crafting some interesting Death Metal tunes. Yet there is still quite some work to do, especially with the drum programming, which is now really substandard and kind of ruins the overall listening experience.