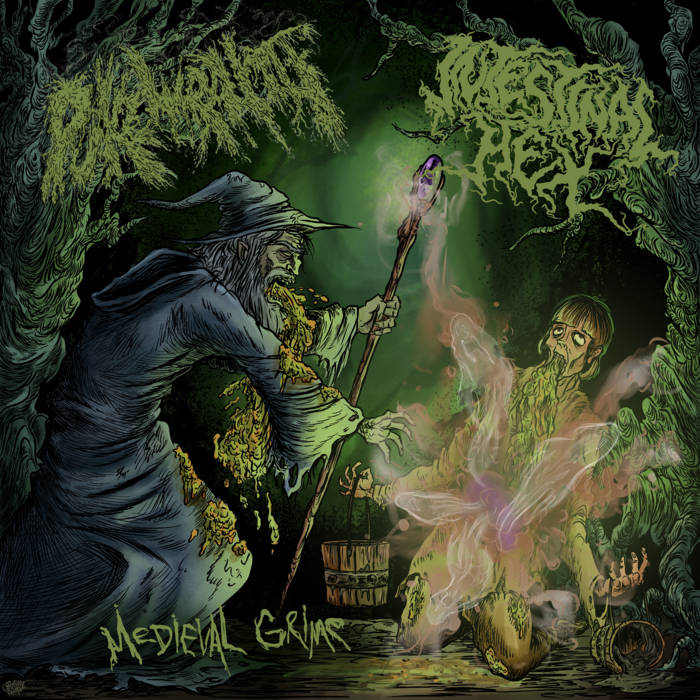 On this Gurgling Gore presented split tape we get two Canadian one-man Death Metal acts, each presenting three tracks. Both musicians have been featured on the VM-Underground pages before, not only with the earlier recordings of both Pukewraith and Intestinal Hex, but also with some of their other musical endeavours. Most notably, both of them are in Fumes and Blood Harvest recording artists Gutvoid. On this split both guys take turns showing what they have to offer with their solo-projects.

With Pukewraith Brendan Dean previously released an EP called ‘Returned Through Bile’, which showed him from a quite an Old School Death Metal side. Rather basic, down-tuned, pretty slow Death Metal with some nice riffs and decent musical ideas, yet the drum programming was pretty much the party-pooper here. It overly digital sound really distracted from the analogue guitar vibe, just making the EP not quite the best out there. And, frankly, it hasn’t improved much. Still the digital rattling drums sound rather poor, poor in sample quality and poor in execution. Another criticism is Dean’s weak grunt, it does sound low but hasn’t got much to offer when it comes to aggression or real conviction. In terms of guitar, it’s only half done. The riffs have the same problem as the grunts, little aggression or depth. The leads are good and really add to the otherwise rather one-dimensional sound of Pukewraith on these songs. In conclusion, compared to ‘Returned From Bile’ Dean has little to offer and there is no progress. I think I personally prefer the EP over these songs too.

Colleague Daniel Bonofiglio struggles more or less with the same problem with his tracks on the Intestinal Hex part. His grunts have the same kind of flat character, not being aggressive nor really convincing. Also the guitars and drums suffer from the same trouble, rather clinical and digital in sound. Yet, not quite as much as Pukewraith. And, most important, they are better programmed. More variety and clearly done with a real drumkit in mind. The music also has a thrashier character so it has a bit more dynamics going on. Same goes for the guitars, while the tone is not really sharp, aggressive or deep, it at least the riffs are played well and especially the leads are done quite well.

Though I usually really like split tapes, with a rather short playing time that makes you sit at the edge of seat because both bands give their best in only little time, this split tape honestly is a bit of a disappointment. I am not convinced both musicians really gave their best on these tracks. To me Intestinal Hex definitely was the most interesting, but I am pretty sure I will not revisit this split tape again. (FelixS)