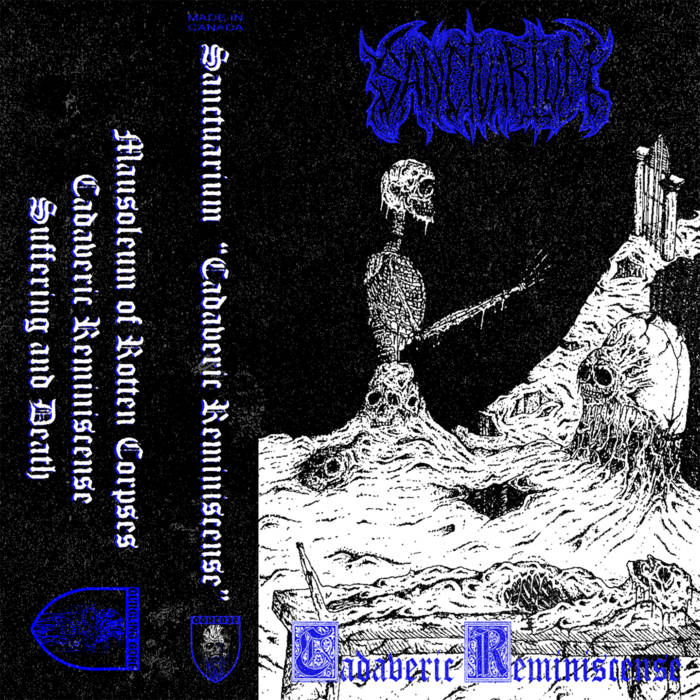 Shane Embury’s eighties grind project Unseen Terror pops up when I hear the buzzing guitar sound on “Cadaveric Reminiscence”, but that’s where all comparison ends as Sanctuarium produces old school Death/Doom in its purest form. Mister Necrohelm mistreated all instruments and created the artwork, ensuring that everything falls neatly into place.

At first, due to the gritty production, “Cadaveric Reminiscence” sounds very messy, yet after giving the demo several spins the tightness of the chugga-chugga riffs and blasts start surfacing. Be sure to give the adrenaline pumping “Suffering and Death” a listen, as the track, after a stomping build up, explodes into a blast fest accompanied by a primitive “OUH” (like Pungent Stench did 30-ish years ago on “Hypnosis”).

All three songs are built up in the same logical Old School Death Metal way and evokes nostalgia in me, catapulting me back to the early 1990s when Death Metal slowly bubbled up from the underground and sounded new and exciting, Sanctuary delivers a fantastic tribute to those long gone times. (Franki_boj)