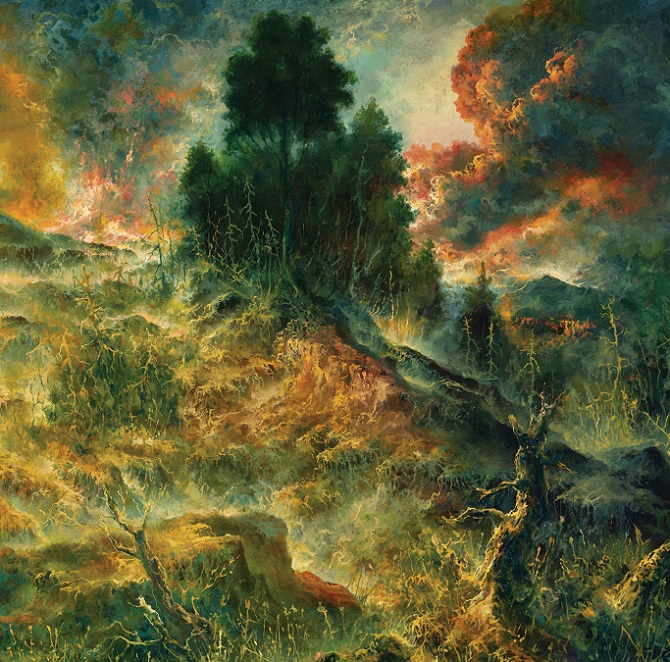 Like their first-born, this second opus from France’s Epitaphe is wrapped in a beautiful cover. A magnificently crafted but ferocious scene of a mountain landscape battling a forest fire. Hailing from the south-eastern French Alps, a certain romanticized influence will be drawn from here, something they also hinted at on both the debut (‘I’, Aesthetic Death & Gurgling Gore, 2019) album and the preceding demo.

And as much attention as the artwork has received, the title of the album is only the uninspiring: ‘II’. But this also immediately reflects the contradictions in the music. It starts with a beautiful serene sounding Opethian acoustic interlude after which an ambient soundscape introduces the real thing. Epitaphe still sounds as schizophrenic as it did on the debut album. A mix between Death Metal and extreme Doom Metal with many creative, progressive elements. For example, if you listen to “Melancholia,” which runs a whopping 18:59, it goes from fairly chaotic Death Metal to Pink Floyd bordering frivolity and through a beautifully assembled ambient soundscape back to Death Metal discordance only to end up in atmospheric ambient again. This sums up what Epitaphe stands for: top-notch creativity and excellent execution, but sometimes a bit directionless and therefore not always easy to listen to – to which the endless songs do not contribute either.

Whether this is a band or album that suits you depends on which genre perspective you approach Epitaphe from. For your average Death Metal fan this will be a bit too far off the beaten path, for Progressive Metal aficionados it will be too extreme, but for an open-minded extreme Doom Metal fan this may taste just fine. For me, these guys excel in creating an immense and impressive atmosphere, but this works especially well when they slow down and distance themselves from the messy and incoherent faster pieces – something they are less capable of doing. There is, however, no doubt about the musical capacity and the overall attention that these Frenchmen put into their work; professionals at work here. If you’re interested in a challenging listen, feel free to indulge in Epitaphe.