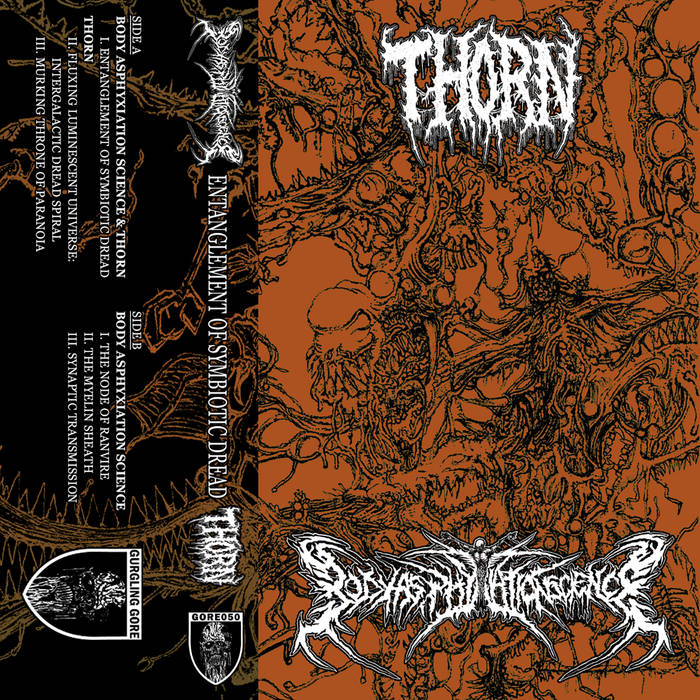 Gurgling Gore, with their 50th release, brings you a short playing split tape between Thorn and Body Asphyxiation Science, that kicks right off after a synth piece that was written and recorded as a collaboration between both acts.

Thorn are presenting two new tracks with a total playing time of just under 8 minutes and that just perfectly fit to its previous recordings. A rather slow and doomy, festering kind of Death Metal that reminds to an even more dragging and gloomy Autopsy. Not all that great, but for those 8 minutes, Thorns is a decent listen.

Body Asphyxiation Science on the other hand convinced me with their absolutely great take on the Death Metal genre. With a focus on cosmic themes and a spacey sound they definitely brought something rather unique to the table. On this split they contribute with three tracks that, frankly, are a little disappointing compared to their earlier material. That uniqueness seems to be a little gone and traded for a way more standard Death/Grind sound. It is not all that Exhumed or something alike, but it still feels something that lots of other bands are doing these days, whereas their earlier recordings were more special. Yet, nothing seriously bad, as the band still twists itself in various angles to treat you on unorthodox rhythms and riffs, but it is the icing on the cake that feels like it is missing.

So, though this might be a little of milestone for Gurgling Gore in terms of their release quantities, it is far from a musical highlight.