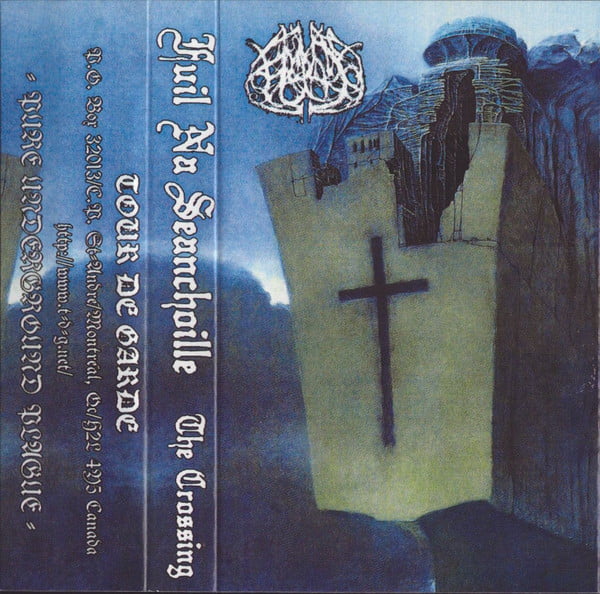 Fui Na Seanchoille release their second full length with “The Crossing”, a 28 minute hallucinatory trip into the darker realm of Ireland’s ghost world.  Main man Satyrign has remained present. An initial release was on Tour De Garde (tape format) until Me Saco Un Ojo Records spotted the pure genius of this peculiar strain of raw Irish Black Metal and released it on noble vinyl.

Musically, Fuil Na Seanchoille dive deep into Ambient music and aren’t afraid to experiment.  “The Crossing” can therefore be seen as a concept album for it harbours a multitude of sounds and styles. The album kicks off with chilling female chanting in Gaelic. As if summoning a storm, the instruments swell in volume and texture, beautifully being absorb by strains of elusive ambient sounds.

The soothing sound of waves breaking on the shores is followed by a slab of primal, ritualistic primitive Black Metal. Almost tribal drum patterns, Neanderthal vocals/shamanic conjurations, simple but effective bass and guitars drive this piece to a climax of feral hypnotism, only to be interrupted by ambient and acoustic sounds before the entire ritual begins anew.  It’s like witnessing some old ritual that even predates Celtic cultures.

These primal sounds remind me of a Revenant Marquis, who also likes to experiment with unusual sounds  and even (just to mention) a band like Into The Woods or even Primordial.

The contrast of primitive and raw Black Metal and Ambient/Neofolk elements does create an extraordinary and bewildering soundscape.

“The Crossing” is about crossing one dimension into another: from pagan beliefs to Christianity, from life to the next.

In my opinion, “The Crossing” is nothing short of a true master piece, although it remains to be seen whether this gem will win more and more fans throughout the years.

Fans who like their Black Metal raw yet adventurous really need to check out “The Crossing”. I’m going to give it another spin and see if I can reach the threshold again. (LCF)