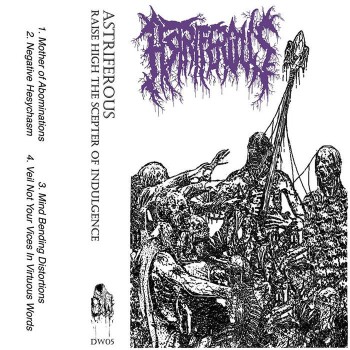 I bet some of you will have the opinion that the Old School Death Metal underground releases have reached their peak, that the scene is oversaturated, that cassettes are nothing more than useless retro wannahaves and the only band that still delivers is Immolation, although I think if you’re nodding to your screen and think “yeah, that description fits me”…you probably won’t follow VM-Underground and read our articles on a regular basis as we keep on giving our opinion on those useless retro wannahaves that keeps on flooding the oversaturated scene. You just accidently clicked on a link somewhere.

If you’re familiar with Bloodsoaked Necrovoid, the Death/Doom combo from Costa Rica, who got signed by Iron Bonehead Productions and released their 2 demos as a compilation this year, you already know 50% of Astriferous. They do have the ambition to play a tad different with this band, as the musical resemblances are going back to the early 1990s and combine the Swedish, Finnish and American scene in a way the result can only be as rotten as a body farm. With hints of the guitar sound of Cemetary’s “An Evil Shade of Grey”, the approach of Demigod’s “Slumber of Sullen Eyes” and Depravity’s “Silence of the Centuries” and the mix of pace changes of Autopsy and some groove of early Deicide (for example during “Mind Bending Distrortions”), you will hear 4 tracks of Death Metal that is just worth your money. Even if you think the scene is oversaturated and a cassette is just an useless retro wannahave… (Ricardo)