Innards – Back from the Grave, Straight in Your Face!! [EP] 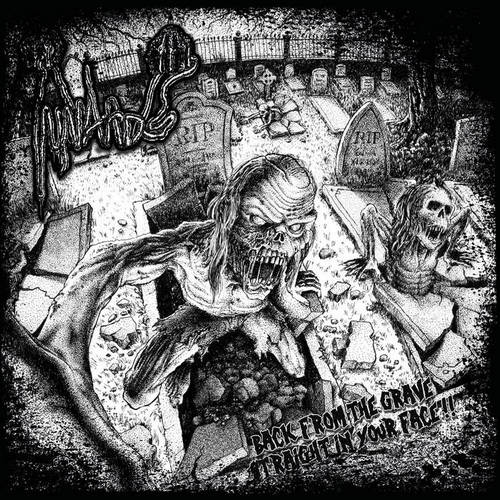 Here you have it! This is a 3 track, 16:20 long debut EP from this Portuguese sickos and it is a disgusting and intense (early) Death, Massacre and (Old) Carcass crossed specimen… The band is formed by members of old Portuguese scene like Filii Nigrantium Infernalium, The Sorcerer and Unburn, bands with different music styles and lyrical themes so it shows musicians good skills and musical versatility.

Gold is what I hear here, once again by this every time more surprising label Transcending Obscurity Records that’s getting the flag of best latest releases together with others from the same root. The sound is perfect for this kind of style, raw but very well mixed for you can hear every note, riff, drum, cymbal and vocals of course.

I cannot deny once I saw the band’s name and cover it was a sure it has to be good stuff but I was really surprised because my perception at first was I would listen some blast beat Death/Grind like but this is really more Death Metal driven stuff…scale riffs and solos that raise in a twisted mass. Well done, and I mean it, very well done debut release. It could fit for a demo but it has all the necessary elements for a debut album, although it could not be because these are only 3 tracks but just making a point here.

Do I recommend this? Of course! Are you into the bands I mentioned? Do yourself a favour and order it. (Gangrene Pus)