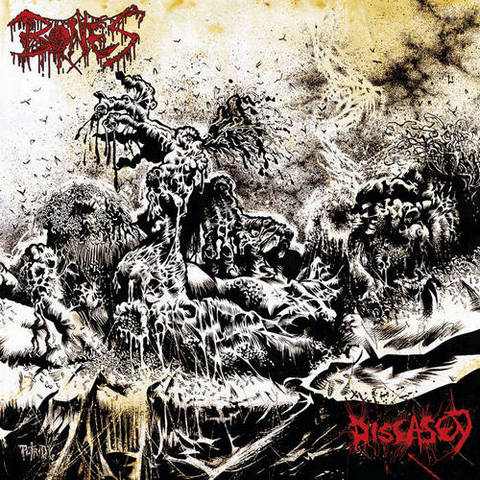 Chicago death/crust metal trio, Bones, has been slugging it out in the underground metal scene since 2009 after its three members departed from another prominent Chicago extreme metal band, Usurper.

On its 11 filthy tracks with a perfect 32-minute runtime, “Diseased” grabs the listener by the throat and doesn’t let go. First single, “Carrion Crows,” is the perfect representation of what Bones does best. By combining a sludgy groove with filthy riffs and putrid vocals, the two-plus minute track takes on an Obituary meets Sodom meets Motörhead vibe.

From the crusty opener “Blood, Diarrhea, and Tears” to the slamming, hardcore-laden finale of “The Future is Now,” Bones delivers a memorable, savage metal attack. Throw in a crusty cover painting by Matt “Putrid” Carr (who also created Bones’ previous two covers) and a gritty production by the band and Jon San Paulo, and “Diseased” is one of the most bludgeoning crust/death metal releases of the year. (KaosSimms)