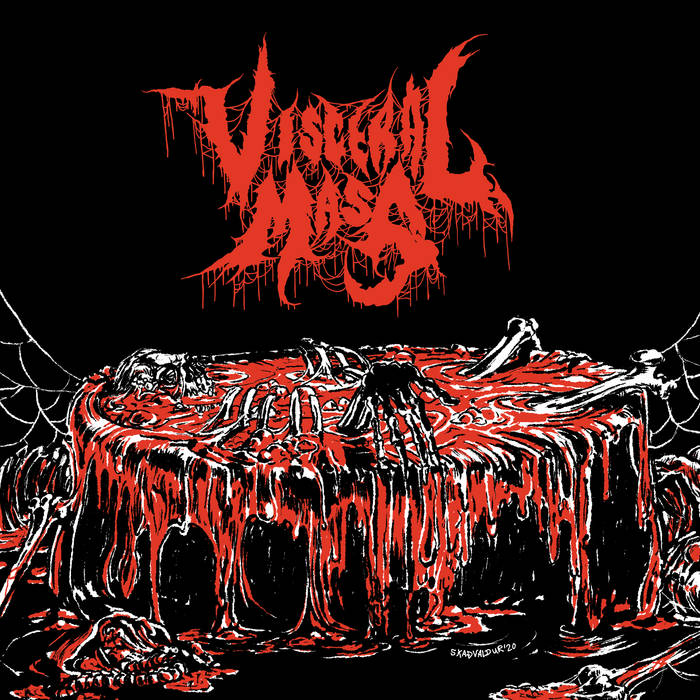 This summer, L.A.-based Death Metal outfit Visceral Mass released their first and so far only release: their self-titled EP. Before delving deeper into the music, I want you to brainstorm your meanest riff face and put it on because this is about to get filthy!

Visceral Mass’s self-titled EP is a project by Jack Scully (guitars, bass, vocals) and Encoffinized drummer Max Baxter, and together they created a release that perfectly fits the accompanying artwork: filthy and in-your-face. In terms of well-known bands, I’d describe it as a combination of early Autopsy and Incantation. Overall, the music on here is fairly mid-paced as is common for old-school Death Metal (OSDM). The straightforward Death Metal action, however, is commonly interspersed with catchy, almost slam-like breakdowns (for example, about one minute into the opening track “Human Stew”). While the instrumentals and vocals do the bulk of the work as far as creating the atmosphere of the EP goes, the crunchy production definitely is not to be understated as it gives the music an edge that would otherwise be noticeably absent.

Let’s now go into closer detail about the juicy songwriting bits and try to figure out what makes this release great! So, there are four tracks on here with a total runtime of about thirteen minutes — but how do you jampack maximum OSDM goodness into not even a quarter hour? Well, Visceral Mass’s answer is: good songwriting. Except for the third (and longest) track “Verses of Perversion,” the remaining three songs all clock in at about only three minutes. Instead of alternating repeating riffs, every single one of these shorter songs focuses on developing riffs and introducing new ideas that constantly keep the listener on their toes. If I do say so myself, the second track, “Flesh Eating Deceased” (my favorite off of the EP) exemplifies this best, with a healthy amount of self-awareness thanks to the arguably cheesy intro sample! The only song that breaks this mould, as mentioned previously, is the second-to-last offering “Verses of Perversion,” which follows a more orthodox intro-verse-bridge-chorus-repeat structure. While it isn’t a bad song by any measure, it feels the most formulaic and drives home the point that Visceral Mass are at their best when they’re most unpredictable.

In conclusion, Visceral Mass’s self-titled is short and to the point, filled with tasty riffs and a production that reeks of the purest OSDM gunk. Cheesy formulations aside, this EP masterfully demonstrates that you don’t have to reinvent the wheel to make sick-ass music which just goes to show that the Death Metal underground is alive and well! That being said, support extreme music and jam out to some Visceral Mass today! Cheers. (PhilippF)