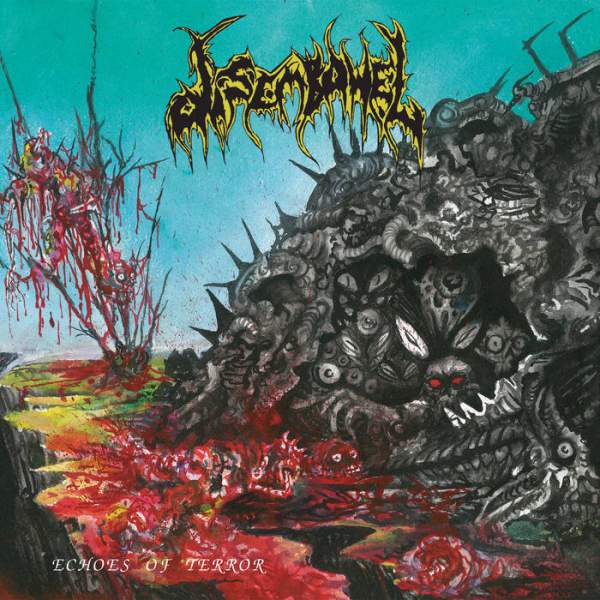 Disembowel formed in 2016, releasing three demos before long awaited LP “Echoes of Terror” and could not be more pleased to have the Maggot Stomp treatment give the magic touch to it. Trio from Portland, OR, a heavy hitting music scene, and these guys stand out with their primitive, chunky riffs and rotten, grimy, guttural vocals as if they’re rising from the sewers to give us some much needed underground waste we’ve been missing out on.

Cover art done by Tatchupichu which reminds me of a brightly covered depiction of The Thing, this grayish blob that looks like it’s transfigured itself, engulfing people in its path. You can see two corpses ripped apart on the ground and one mangled up in the tree branch on the left; really like the colors used, especially the blue background to give it more life in the illustration.

Includes nine solid tracks, clocking in at about 35 minutes; bit surprised that aside from “Sadistic Pleasure” and “Ripping Christ off the Cross” they didn’t feature “Darkness” on this album that was taken from their 2016 demo ‘Dramatic Decay’, but still very content with what was included on this LP. You hear a cross between Demilich and Abhorrence, mixed with some classic Autopsy as well. Some notable tracks I really dug on this album is “Chuffed Beyond Recognition”, which has a dope guitar riff intro that kicks in Abram Ancira’s sweet bass notes at 0:13, with vocalist/drummer Sergio Ginez constantly shifting tempo and giving us a slowed down riff by 1:49, building back up by 2:37, leading into a quick solo 3:04-3:17 by guitarist Gage Halupowski, and Ginez pounding away for the outro. I also enjoyed “Ascend to Obscurity”, fast pace and full of blast beats, it’s short and sweet, aside from their other short-er opening track “Putrefied Remains.”

Production on this album is spot on, giving enough clarity when needed but still keeping the raw, organic sound to keep it filthy for our listening pleasure. (Tori Belle)