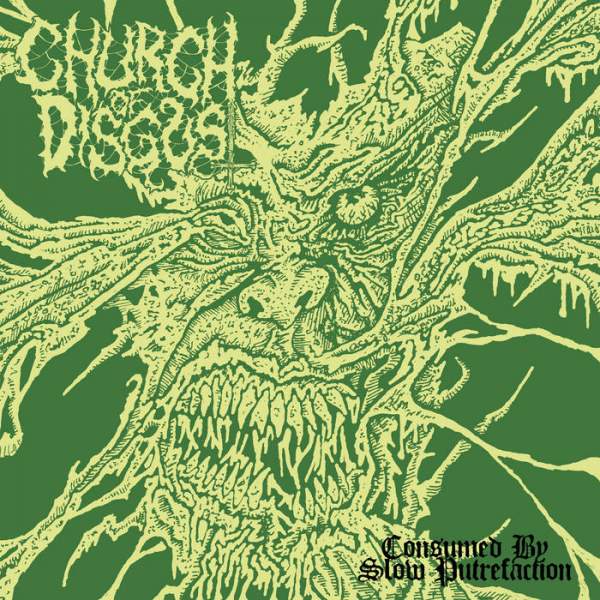 Formed out of San Marcos, Texas in 2010, originally a duo between Joshua Bokemeyer and Dustin James. By 2013, decided to bring in Travis Andrews on bass and Dwane Allen on drums, creating more of a monstrous melody between them. Releasing 2 demos, 2 splits, 2 full lengths, and now their 2nd EP “Consumed By Slow Putrefaction” is a hell of an addition to keep the momentum going for these guys. Artwork for this EP was created by infamous Nightmare Imagery, showing a disturbing creature’s face with what reminds me of that horrific scene from Hellraiser (And Jesus wept *spits blood* ) *cringes* yet a simplistic color scheme, instead of a typical horrific mess and pops of colors.

“Consumed By Slow Putrefaction”‘s production on this EP is quite impressive, giving the right amount of grisly distortion while also balancing some clarity in the vocals without overdoing it. Three tracks are featured for this EP, starting with title track of the album “Consumed By Slow Putrefaction.” Great intro track, especially towards the middle with Allen’s tempo shifts at the appropriate times necessary to go along with Bokemeyer’s guitar and Andrew’s bass. “Drowned in Eldritch Slime” is my favorite on this EP, with Andrew’s dope bass solo at 0:00-0:12, and towards the middle, there’s a sudden pause and then 1:55-2:10, James’s solo creeps back into the track, which is refreshing to hear alternate solos between the lead and rhythm, not often these days. Also admire the use for Lovecraftian theme going on as well. “Burst Coffin” is the last track featured and a heavy hitting tune to end the EP.

I love the technique these guys have and how it all meshes together to go along with James’s vocals. Compared to earlier releases, production wise this EP is one of my favorites and hoping for at least another LP sooner than later. (Tori Belle)