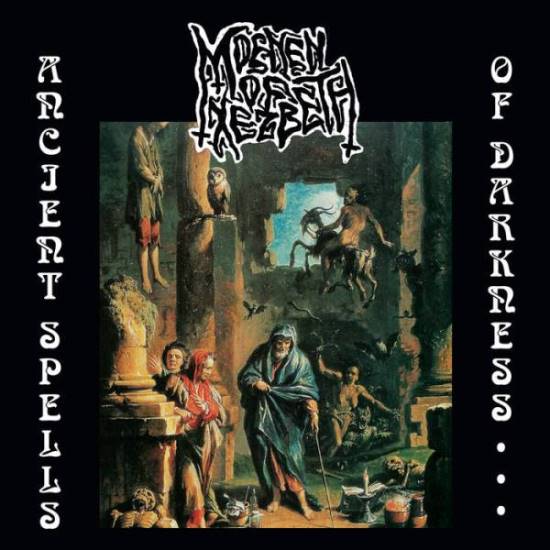 I just have to make my apologies, as I ignored this album for far too long. It has been in reach for months and just left it there and didn’t give it the attention it truly deserves. Moenen of Xezbeth is from Belgium, I can tell you that. Any other info isn’t really known, although it seems an individual called Morbid Messiah of Perverted Ceremony is active in this perverted dyad.

Prior to this mighty debut there was a demo (“Dawn of Morbid Sorcery”) and an album advanced tape on good old TDK, which is something you don’t hear that often anymore…album advanced tapes. The album title just speaks for itself as the music are ancient spells of darkness. The hazy sound in general, the gritty and roaring bass, the pounding drums, the enhanced atmosphere by the synthesizer…they are all the perfect under structure for the Ancient Occult Black Metal in the vein of Samael’s “Worship Him”, old Beherit, Mortuary Drape, early Necromantia and Necromancy on their “Ancient Wrath” EP concerning atmosphere.

This is not perfect, unclean, dark and fuckin’ majestic Black Metal! Everything is done in the right way at the right time…just listen to the title track when the bell chimes several times. For me a simple thing like that is enhancing the atmosphere. Now if you excuse me, I have to think of a suiting punishment for ignoring this album…I think drinking a couple of Rochefort 10 or Westvleteren 12 while listening to something beautifully horrid like this, will do the trick…that will teach me. (Ricardo)