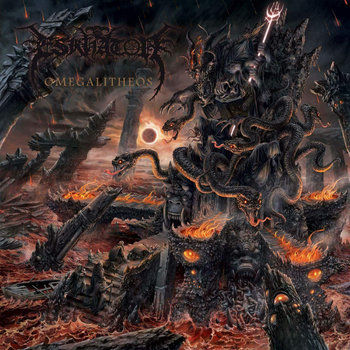 Australia and their chaotic barbaric bands. I don`t know what they do down under, but the amount of brutal bands is crazy and Eskhaton is another name on this list. Their new album is released by Lavadome Productions and is pure chaos and hatred. Hyperspeed detonations and nuclear annihilation in musical form. Their 3rd album is crazy, chaotic and disturbing. No fun, no mosh, no core…Just in your face brutality. Frenzy fretboard wankery (I love chaotic riffs), blastbeats`til death and brutal voices proclaiming death and destruction. There is a lot of Diocletian/Bestial Warlust riffing, sometimes changing into Hate Eternal/Morbid Angel dissonanz and tremolo picking. The band has a certain amount of slow motion parts which are heavy as fuck and evil the way death metal should be. Some chord variation has similarities to countryfellas Altars on their album “Paramnesia”. The guitarsolos seem to be from the Azagthothian/Rutan school. The entire sound has also an Impetuous Ritual feeling, with a clearer sound although chaos still reigns supreme. I don`t know how much will be memorable of the album because of its high intensity and chaotic nature, but for now it`s just pure fun. Chaos reigns!