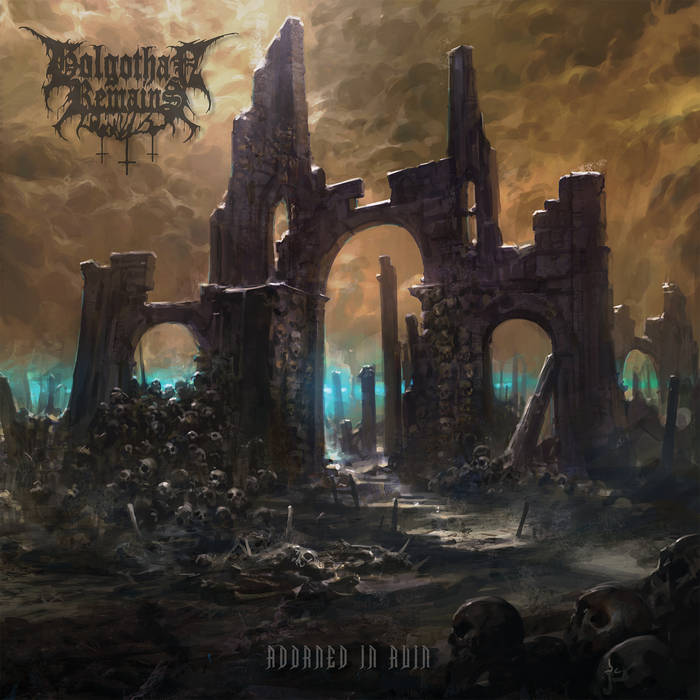 Sydney, Australia is the home of Death Metal band Golgothan Remains who clearly don’t let living in a sun kissed land of surfers and coral reefs get in their way of creating gloomy Death Metal. ‘Adorned in Ruin’ is the bands sophomore full length album and their first post-pandemic release, a follow up to 2018’s debut album ‘Perverse Offerings to the Void’. This time around two labels have combined to release the album on all formats, Sentient Ruin Laboratories and Brilliant Emperor Records.

If I had to use one adjective to describe ‘Adorned in Ruin’ I’d go for uneasy! It’s an uncomfortable album to listen too, and one that certainly doesn’t try and fir the mould of what a Death Metal album should like. For a start there is a predominance of barked and howled vocals which would usually sit more comfortably within the frosty realms of Black Metal, and yet here are Golgothan Remains incorporating them into their own sound alongside the more genre specific deathly growls.

I’d say that a lot of work has been put into the song-writing for this album and the end result is an opus that just will not stagnate. In particular the guitar rhythms and melodies are all at worse insane, intense and forebodingly dark. Add into the mix the crushingly heavy and unrelenting drumming barrage combined with punishing bass play and you have all of the ingredients for a sickeningly heavy album with an almost overbearing need to fill your head with maniacal shrieks.

Summed up neatly, ‘Adorned in Ruin’ is one of the more unpredictable and emotionally savage Death Metal albums I’ve heard. This isn’t some gore ridden cliched album, there is a sense of Machiavellian levels of horror embedded in the lyrics and sound of this opus, Biblical, Old Testament horrors that predate anything that filmmakers could conjure. It has darkness and malice at it’s very core and it isn’t for those who just want gore and blood and chugging riffs. (Luke Hayhurst)