Consummation – The Fires of Calcination [Compilation] 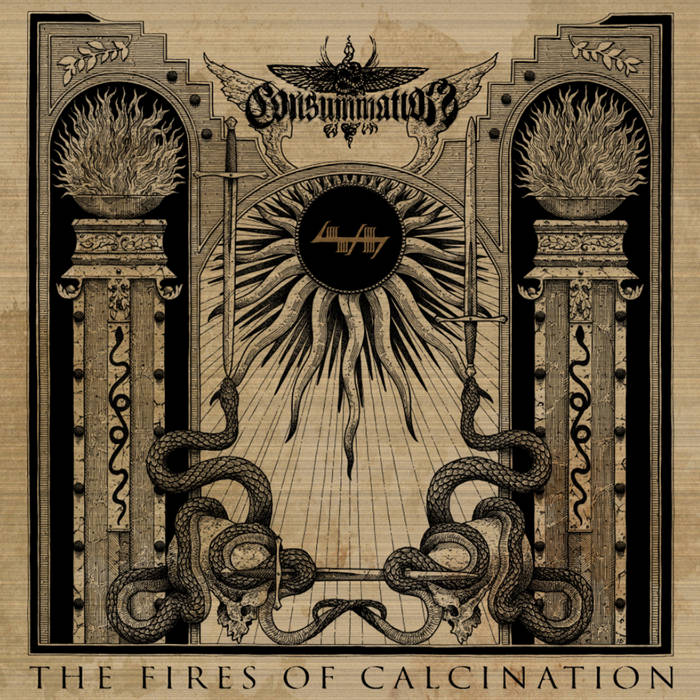 Between the years of 2012 and 2017, Brisbane, Australia’s Consummation released their self-titled demo and the ‘Ritual Severance’ EP. These two impressive Black Metal releases then received a compilation re-release on LP via Oakland, California label Sentient Ruin Laboratories. Entitled ‘The Fires of Calcination’, this retrospective look back at the early works of Consummation showcases a band that fired straight out of the blocks with impressive talent, as well as a truly harrowing sound that set the tone for their entire career to date.

Side A (Consummation Demo – 2012) opens with the sonic roaring maelstrom of noise that is ‘Heautontimoroumenos’. (In Greek this translates as ‘The Self-Tormentor’) Deathly ear piercing growls and shrieks ring out of an all encompassing gloom created by bombastic bowel clenching drum beats mixed with a furious, psychotic episode inducing aggression and bleak, primal fear evoking guitar leads. Consummation are adept at conjuring deep rooted insanity through blackened, intensive and gruelling guitar melodies that sound both ruthlessly uncivilized and monstrously cavernous. In very much the same vein, ‘Rend the Ain Soph’ has the gravitas of a mind being rend asunder by sheer insanity, in this case represented by a duelling concoction of disturbing vocal work and lurid, nightmarish guitar tones.

Side B (Ritual Severance EP – 2017) has more emphasis on track length so that both songs have room to expand and breathe whilst simultaneously delving once more into the great chasm for more utter desolation. Opener ‘The Weightless Grip of Fire’ instantly displays the same level of intensity as the demo from five years prior, however it is also very noticeable that Consummation have progressed and matured in terms of how their music flows whilst still maintaining their severe, primal edge. A key feature of this track is the maniacal density of the guitar leads which convey a sense of spiralling uncontrollably into a yawning void of nothingness, and puts me very much in mind of ‘Aura’ era Bolzer. Another aspect of the bands sound that has increased is the bands technique and especially their dazzlingly sombre guitar solos which add another layer of melody and technical excellence to an already stellar release.

We have not seen any new material from Consummation since their 2019 Profound Lore Records released LP ‘The Great Solar Hunter’. I sincerely hope that the band remedy that situation soon! (Marksson)