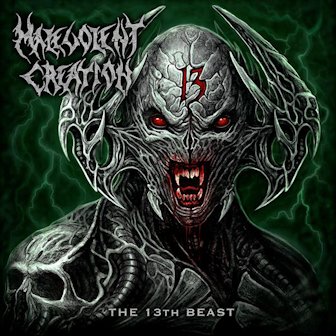 To some.1987 feels like an eternity ago. Some of you weren’t even born yet, but for those who where around the mid to late eighties through to the early nineties was one of the golden times in terms of Metal music, and Death Metal was at its peak. Bands such as Morbid Angel, Obituary, Deicide, carried the flag on American soil, and with them was also a certain band called Malevolent Creation, and of course that is who we are here to discuss.

The 13th Beast is aptly named. First and foremost it is in all reality their 13th full length release, and yes, no surprises here, it really is a fucking beast. After dealing with the death of original vocalist Brett Hoffman in 2018, the one and only consistent member throughout the bands history, a certain chap by the name of Phil Fasciana, could very well have just thrown in the towel and said fuck it. No-one would have blamed him, Throughout the years Malevolent Creation had certainly paid their dues in every aspect, and have a legacy that is timeless. One cannot go past “The Ten Commandments” as far as classics go. And that’s a fact. Instead, he chose to get three more sick bastard’s together and say fuck you to the grief, and fuck you to the world with one hell of an album.

Yes, it’s exactly what you would expect from a man and a band with such a pedigree. It’s fucking Death Metal, and the sort of Death Metal that makes you wanna bang your head until your neck fucking breaks. New vocalist Lee Wollenschlaeger barks incessant foulness like a rabid dog over the top of crushing pile after pile of riffery from new recruits Josh Gibbs on that low end four stringed fucker, aided by Phil Cancilla beating the christ out of some skin, and the aforementioned Phil F brings the madness to the party on the guitar. Lee also plays the guitar, how the hell he does so whilst spewing out such foulness is beyond me, but apparently he is quite the talented man.

Death Metal at it’s finest, and foulest is the key here folks. The wheel has not been re-invented, it just got a new tyre, and it has very fucking large spikes on it. Highlight’s? “Agony for the Chosen” is a lovely example of how to crush some heads, the mid section riffs will do just that if you let them out the door. Influences may appear, but how the bloody hell do you say a band of such stature that has influenced others, is sounding like any other band when they pretty much where there from day dot. Perhaps the injection of new blood has brought some new ideas, and in no way are they bad.

“Born of Pain” delivers a masterclass in how to get a pit moving if ever there was one. I challenge anyone to stand still and just nod whilst this monster is drilling itself into your brain. Like a jackhammer on some serious roids, brutal, chugging beauty in it’s most spectacular form is the order of the day right here.

“Canvas of Flesh” is another head pounder. No fucking around here ladies and gents, this is pure Death, and pure class. Each and every instrument working in perfect, well, harmony, to smash the living shit out of any idea that Phil F should have just walked away. I don’t need to explain this stuff, if you wherever a fan, you will be again. Some will say that bands of this ilk should just fade away, that they have no more relevance and it’s all been done before. My response? Fuck you, and get the fuck away from Metal you arsehats. Yes, some of us don’t want a bloody reformation moment or a change from what we like. This is perfect, and this is Death Metal, Eat a bag of dicks if you disagree ha-ha. Long live Death Metal, and long live Malevolent Creation!