At The Gates – To Drink from the Night Itself 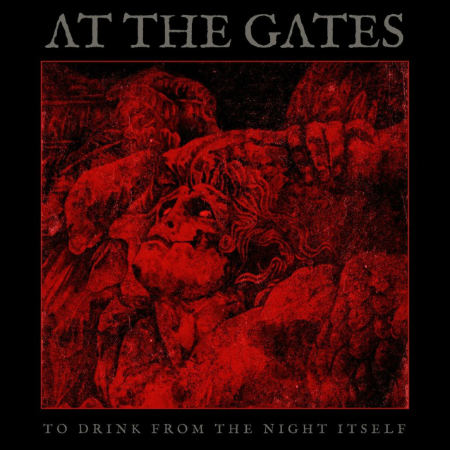 At the Gates is one of the more familiar names floating around the melodic death metal world and rightly so. Since 1990, they have maintained almost the same line-up and have a distinct sound that has set them in to the highest echelons of Swedish metal. Not a band to rush releases, “To Drink from the Night Itself” is the 6th full length from the Gothenburg titans and it’s a worthy release. The vocals continue to become more polished especially in comparison to their earliest albums and take on a more melodic feel with cleaner production. They have also experimented more with core elements, although not in an off-putting way. This is reflected in both the vocals and the guitars and its done with enough moderation that a long-time fan won’t cast aside the album, but someone who was previously not a fan may discover a new taste for the band. It’s a great time to revisit the band if you’re someone who hasn’t gotten much excitement from them in the past. Starting the album off is a beautiful string composition immediately followed by the barrage of classic Swedish melodeath right in your face. Intense drums and loud, powerful guitars that occasionally break into epic solos, get your blood flowing and of course, all the catchy choruses that you’re going to be yelling out in your car, or at random metalheads on the street. As with all of the greats of the genre, it’s easy to envision the obligatory mosh pit when you crank one of their albums. At the Gates is no exception and they throw 11 fast paced songs at you compelling you to go full throttle in the pit. As witnessed in the last 28 years, At the Gates is a powerhouse that is here to stay and continue to produce high quality melodeath that doesn’t shy away from new tricks. Let’s just hope they don’t make us wait 4 years again. (Kaje)

One of the most important metal bands on the planet is back. 4 years have passed since their comeback album “At War With Reality” was unleashed upon mankind and the band is still hungry. The trademarks are all here. The beautifully orchestrated melodies, Tompas outstanding vocals and so on. But the question is, do they reach the same level of quality of the releases they already released? Do they stick to their melodic formula and play it safe? Well, I found out the following answers. The quality on this album is high, no doubt about it. A great production, the way we know it from these guys. The songwriting is excellent, no matter if it`s faster punchy Death Metal or mid tempo bangers…they know where to put some variations. At The Gates aren`t going for a more technical way to change some things compared to its predecessor, although a bit more “The Red In The Sky Is Now Ours” in terms of twists and turns would have been great though, but for a more varied and often „softer“, maybe progressive way here and there. They are using acoustic/clean guitars, single picked chords, palm muted riffing and so on, sometimes bringing certain bands like Opeth or Tribulation to mind. But don`t worry, they are not sounding clearly like those bands. The Crust and Thrash rifffings are gold and bringing a good dose of aggression in their sound. At The Gates worked on a lot of details, something you can really hear in the basslines and of course in the guitar section. “To Drink From The Night Itself“ is a more varied, less brutal, more plausible album which makes it good in their discography. Fans of the band, who are looking for a varied style of melo-death with bangable hymns should check this out. Better than expected. (DPF)