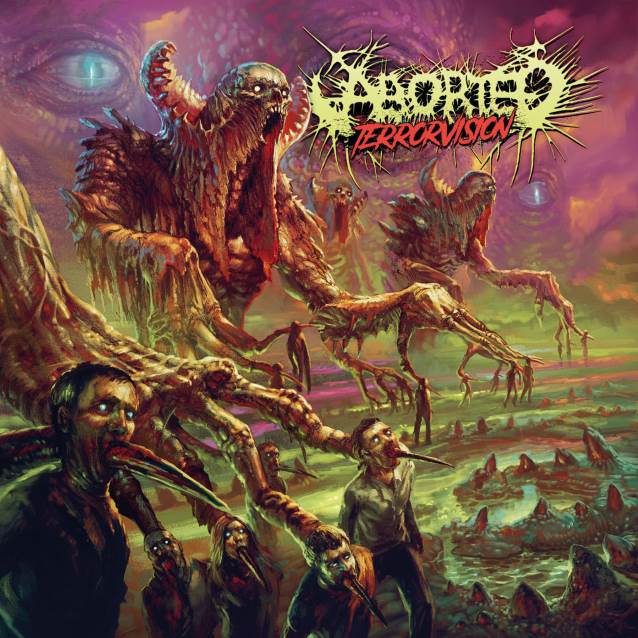 Let me start off by saying that Aborted is, in my opinion, one of the truly great modern death metal bands. They consistently do most things exceptionally well. I have definitely been a fan for a long time, leading me to jump on this review as soon as I saw the option. My first listen was running the track while going through my workout, and it certainly provided the necessary motivation. Big picture, I’m not sure yet how I feel about “TerrorVision” compared to earlier works, but first let me talk about the album itself. On this release, the mighty quintet from Belgium seems to have gone through something of a change in direction, or perhaps more aptly, a refinement of direction. “TerrorVision” is still clearly an Aborted album, but the grind influences which are probably my favorite part of the band are less noticeable, while the modern tech death influences, arguably my least favorite part of the band’s style, are a little more in the forefront. The differences are making this a somewhat less enjoyable listen for me, yet these are minor quibbles. The band hasn’t ‘jumped the shark,’ as the saying goes. “TerrorVision” is still an amazing album in its own right, and one that will undeniably be getting more spins from yours truly. It just won’t top my list of favorite Aborted albums. (Hayduke X)

Aborted are a band I discovered when their debut album was released. It was raw, and blistering goregrind and to say the band has evolved over the years would be a definite understatement. Truth be told I had somewhat lost interest in Aborted over the years but the previous album “Retrogore” drew me in with its horror aesthetic and that aesthetic is continued with “Terrorvision”. Aside from a horror movie soundtrack sounding intro and the cover art itself though, the album is lacking a true horror feel to it. It feels like a missed opportunity. That is a small complaint however as there is still a lot to like about this album.

“Terrorvision” is a good album, possibly even a great album, but it has a few issues. My main issue with the album lies in the songwriting. Each song has a few parts that will make you say fuck yea and headbang but the pieces of the puzzle don’t always come together in a memorable manner. When the album does click though it hits with a ton of ferocity. The title track is a great example of the album hitting the mark. The riffs run the gamut from blistering hyper thrash riffs, slam style riffs and even some more atmospheric and almost black metal sounding riffs. The vocals twist and turn to match each change before escalating to the excellent gang vocals towards the end that I’m sure will bring massive crowd participation when the band plays this song live. Sven is an amazing vocalist and one listen to the album it is clear that he came into the studio prepared and ready to lay down some vocal annihilation.

“Squalor Opera” was a bit underwhelming when released as the first single but with multiple listens it is becoming evident why they chose the song as the first taste of the album. It is as high octane as anything on the album but features one of the strongest choruses of the entire album. To my ears it is the switching between the blast beats and the thrash style riffs that really brings the song to life for me. The melodic section that leads into the guitar lead is also a killer moment in the song. “Deep Red” though is my favorite track on the album. It’s a more mid tempo song and to my ears is the most memorable song on the album. The band does a very effective job of returning to the chorus multiple times and each time it is actually a different tempo. The chaotic crescendo of the song is one of my favorite sections of the entire album.

I think the band could have possibly trimmed the fat a little bit with the songs. I wouldn’t say any of the songs are throwaway songs by any means, but the songs that keep things shorter are the more memorable. “Squalor Opera,” “Visceral Despondency,” and “Deep Red” are when the album is the most effective and they hit in rapid succession. The songs that hit the 5 or 6 minute mark just don’t keep me as interested as the shorter more hard hitting songs do.

I think ultimately your enjoyment of this album depends on what style of death metal you are into. This is a very modern sounding album. The production is modern, the guitar leads are very similar to what a lot of bands are utilizing right now and at times the album does toe the line of deathcore, which is an ugly word for a lot of death metal fans. I managed to put aside any preconceived notions I had of the current direction of the band and at the end of the day “Terrorvision” is a very enjoyable album. It’s not perfect, but it is executed very well and has moments of genius sprinkled throughout. (MikeH)