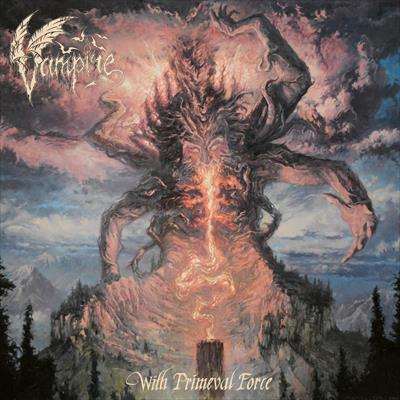 Vampire is a death/thrash/horror metal band from Gothenburg, Sweden. With the release of their demo “Vampire” back in 2012, the band started to gather a considerable high number of fans around them with their unique blend of death and thrash. Two years later, and already signed by Century Media, we witnessed the release of their brilliant debut album (with the same title, “Vampire”) and later on an amazing split 7’’ with their label mates Miasmal. With a significant change on their debut album sound, the band releases an EP in 2015 (“Cimmerian Shade”) to prepare us for their second album, “With Primeval Force”, where their sound expanded to a Dissection melodic vibe mixed with their unique death/thrash combination. The album is a musical work of art, placing Vampire among the metal elite. Clocked just under 40 minutes spread among nine tracks, the band makes sure the listener knows what is coming their way with the amazing opening track “Knights Of The Burning Crypt”, a fast and melodic song that captures our attention from the very first riff. But it doesn’t stop here! The rest of the album continues to do the job of grabbing our full attention and always wanting more and more and more… A clear step-up on the quality chart for the band! The album deserved a better cover art, though… (Antonio)